We have a little park about two blocks from our house that I brought Abby and Michael (and sometimes even Mia) to several times over the course of last summer. Though the older two have both been back once since the end of winter, it was Tom who accompanied them and brought their joyful, mud-covered faces back home.

Though I'd made no particular plans to venture out there today, the call of the gorgeous weather outside could not be denied, so what started as a simple walk with Abby after lunch while her siblings napped turned into a foot journey through the neighborhood to a beloved and familiar location. Her eyes lit up when she saw where we were and she was off at a gallop, seeking out her favorite equipment.

These were all things I'd seen her use before: slides, rock wall, seesaw, rocking/bouncy horses, monkey bars. However, I was not prepared for the skill with which she suddenly scaled and mounted them all. She was up and down the highest slide before I could even send Tom a text to let him know what we were up to, and she got there by way of the rock wall which used to nearly stymie her before. 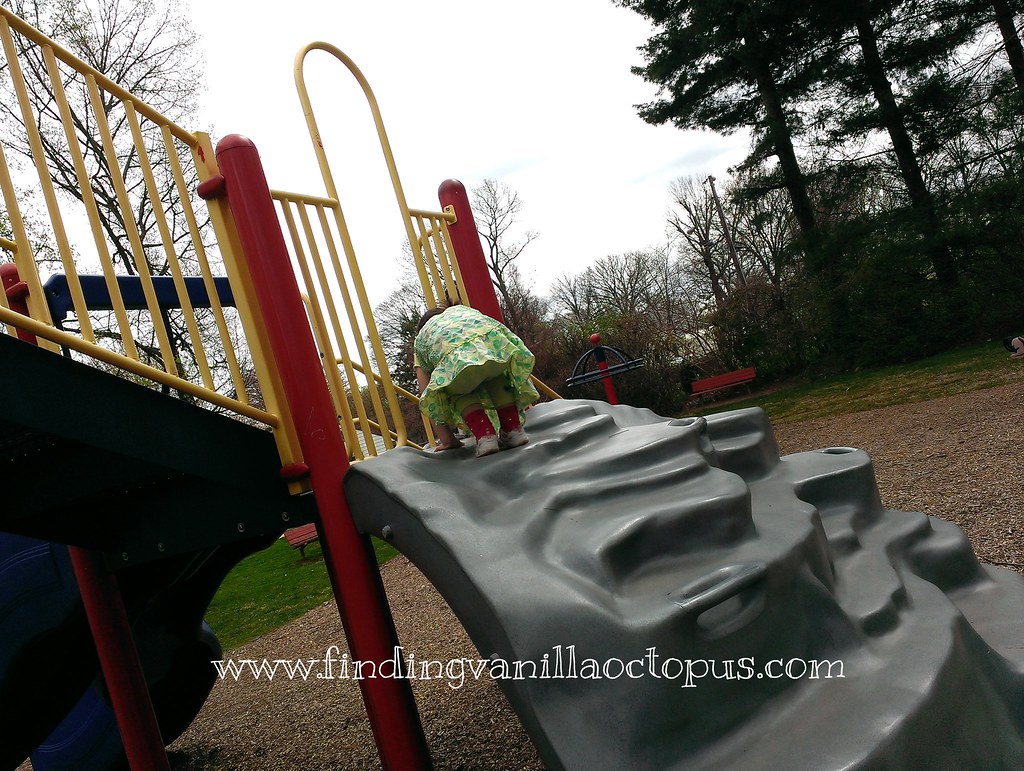 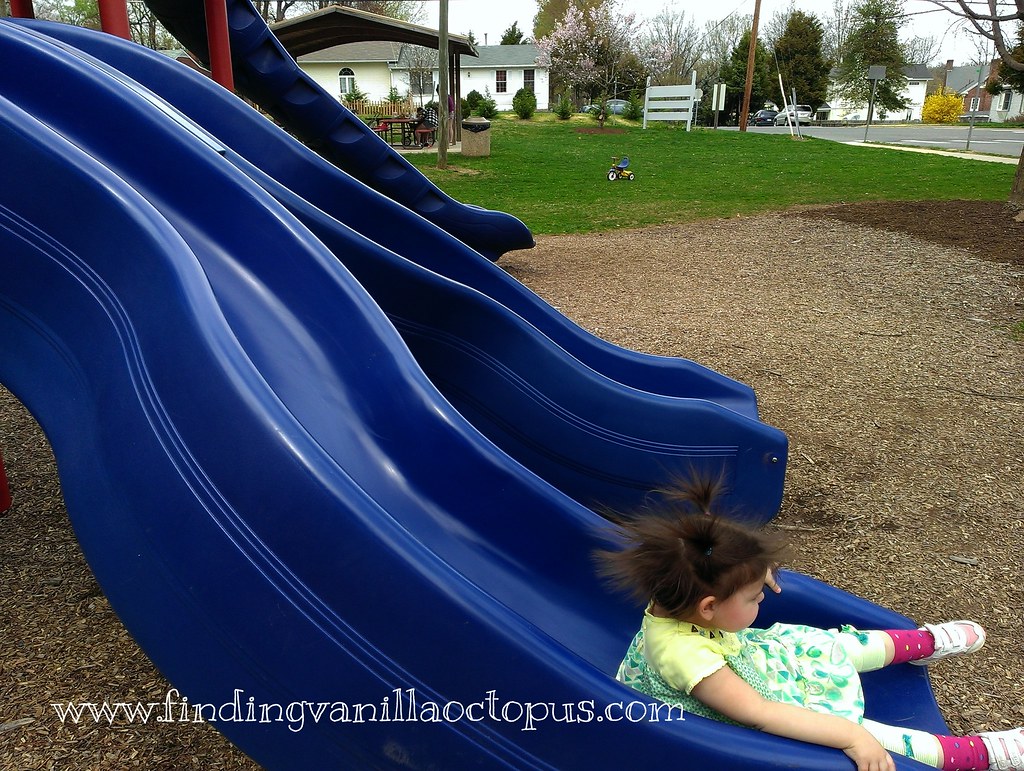 When she turned her attention to the bobbing horses, she did not merely sit upon their backs- a chore which was challenging enough to accomplish given her short stature- she rocked them forward and back as they were designed to do. 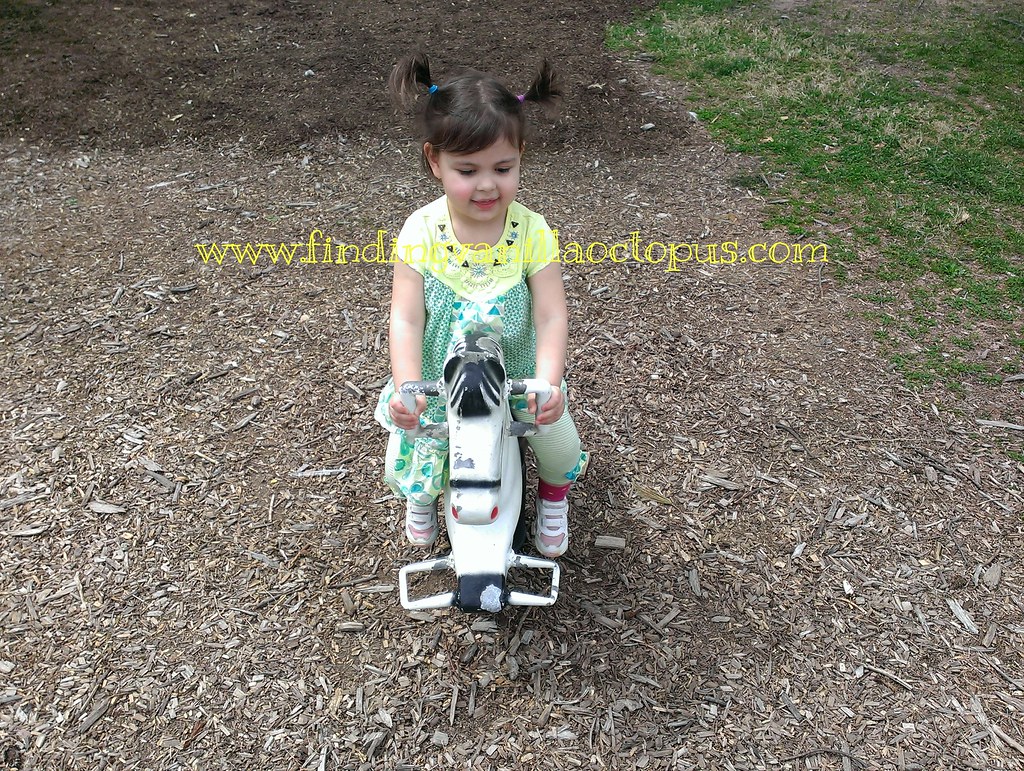 Next came the see-saw, which she mounted in a flash. 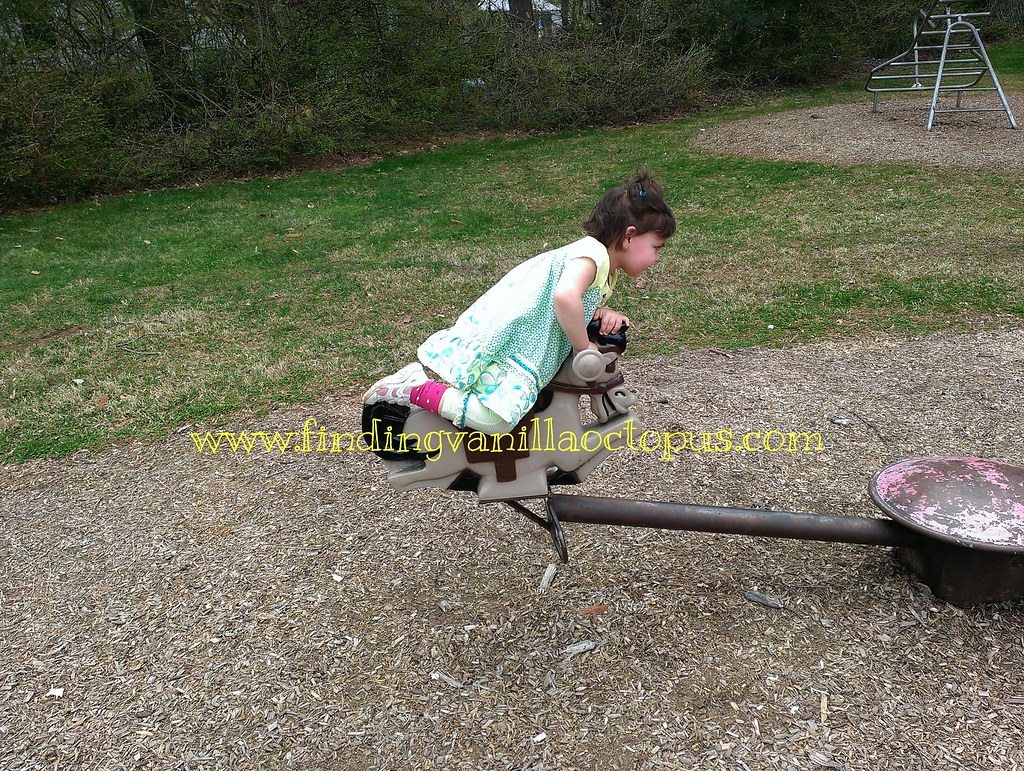 She didn't actually understand what it was supposed to do initially, but she caught on quickly once I volunteered to act as her opposite. 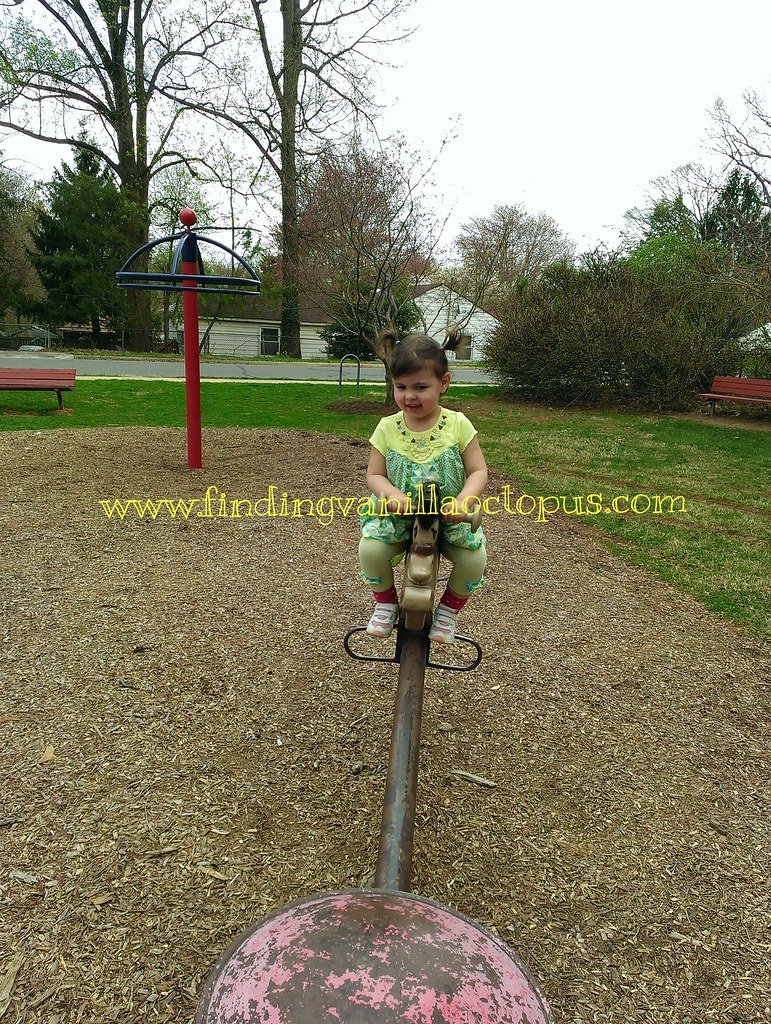 And before I knew it, she'd found a partner closer to her own size. 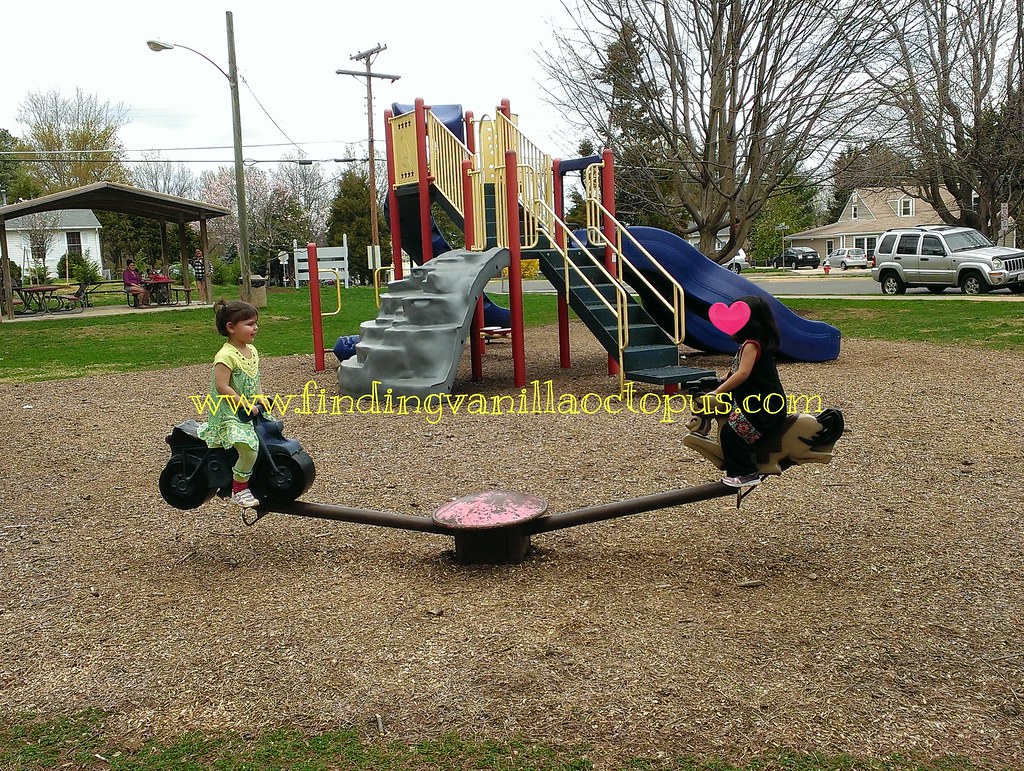 Of course, I hadn't given much thought to what this sudden attainment of preschool-level balance, coordination and understanding might mean when it came to which equipment she would favor and what activities she might try.

Not surprisingly, her favorite spot ended up being a set of monkey bars, which she fearlessly ascended despite the terrifying (to me) stretch of fabric that dangled perilously in the way of small feet as they tried to find their purchase,  and which I was absolutely not allowed to tuck into her pants to keep out of the way. 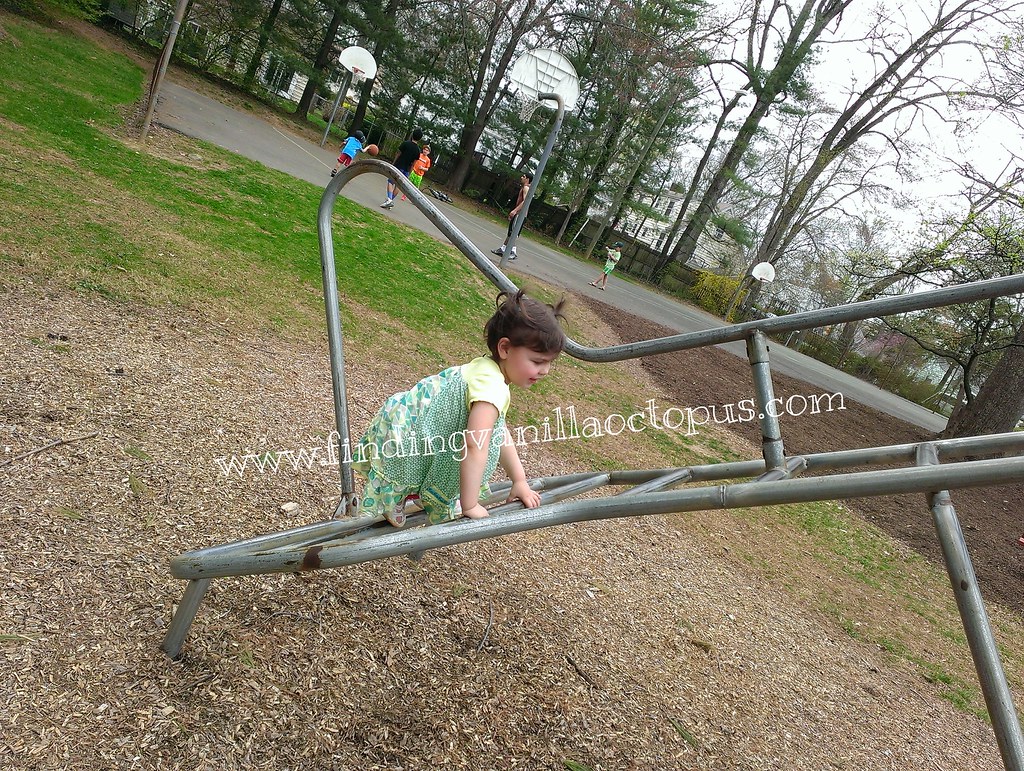 Up and down she went, over and over. My heart hammered as I forced myself to watch at a bit of a distance, trusting her to make her way and learn life lessons, if necessary. 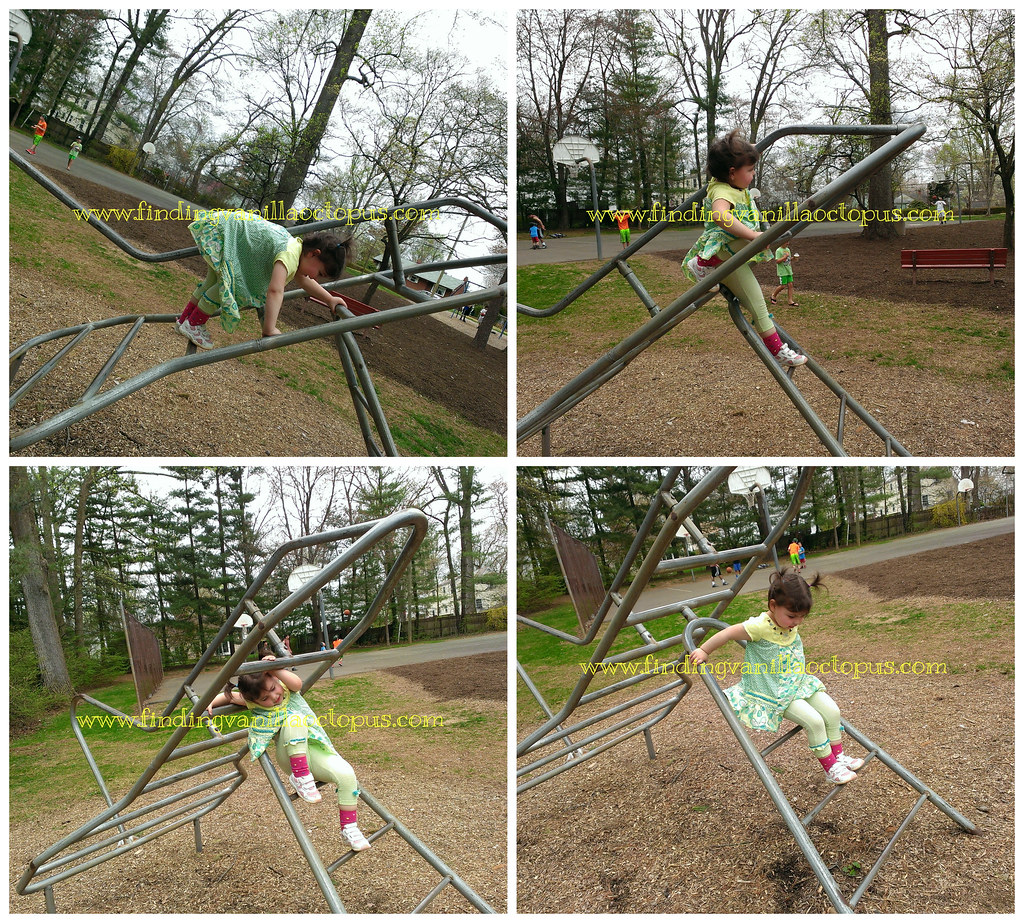 Nothing caused quite the ache, though, as the realization that this was probably the tamest display I'd ever see of monkey bar feats in my near future.

I've got a lot of letting go to do still, and as usual, I'm quite sure I'm not yet up to the task.
Posted by Unknown at 7:10 PM