Like every other holiday that ever comes anymore, I was not ready for Easter. However, especially given that the reality of Easter all but disappeared in the aftermath of Mia's birth last year, I was determined to truly celebrate it this time around. I had no notion of how we would get ourselves to Mass, but I was determined to try. I was pretty sure we'd never fit in the dyeing of eggs, but I was keen on organizing an egg hunt anyway. I was quite certain that our house would not be in acceptable shape to host Easter dinner for my family, but we welcomed them all the same.

As it turned out, we got to church late, but we made it there. We attended Mass from the lobby, which I was sure would make me feel disconnected but actually provided the opposite experience amongst so many similarly situated families. As I watched young children (including my own) run and giggle in the freedom of the wide open space, I felt love and community, even if I couldn't hear every word of the liturgy.

When my family arrived,  the state of the house was forgotten. We talked, connected, ate, drank, and enjoyed our time together, which we've had less of in recent months. Though Mia and Michael had some adjusting to do with the interference of the Mass schedule on ordinary naptimes, Abby was in her element all decked out in ribbon and lace.

Indeed, it was hard to say who was enjoying her Easter finery more: her, or me. Though she clearly felt and acted the princess in her delicate floral layers, I was mesmerized at the sight of her natural poise and grace as she modeled them. 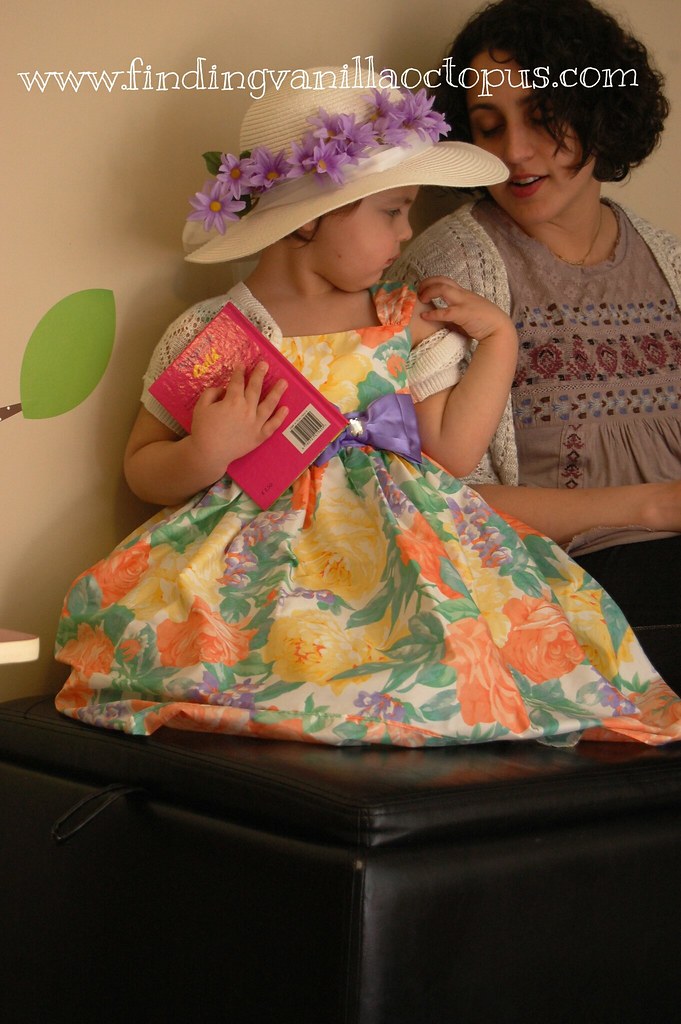 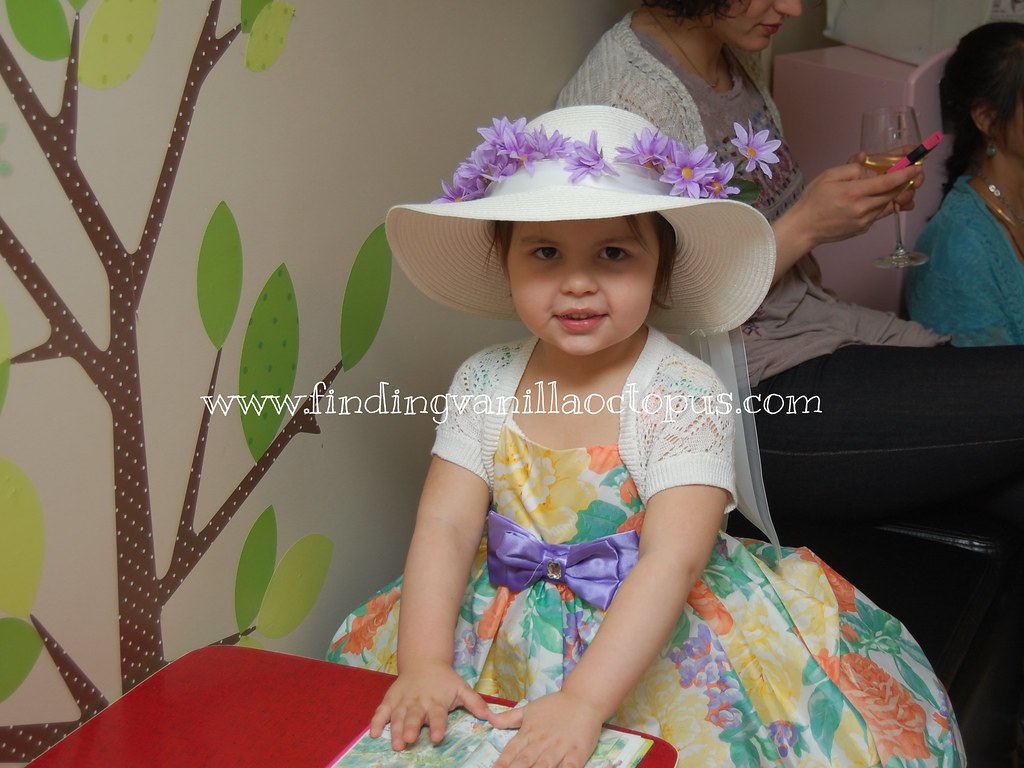 For Mia, however, dressing up has always been a more complex process. Generally, the prettier the outfit, the less range of motion she has in it, chained as she still is to the floor on her knees. To make matters more difficult, I felt that her dress would not breathe well enough to nap in, so I removed it before putting her down. This meant that to get the pictures I'd had no time for in the morning, I'd have to put her back in it when she woke up, ensuring an unpleasant mood for my littlest princess.

The offer of a cracker transformed her for just long enough that I could capture some moments of her on the floor. 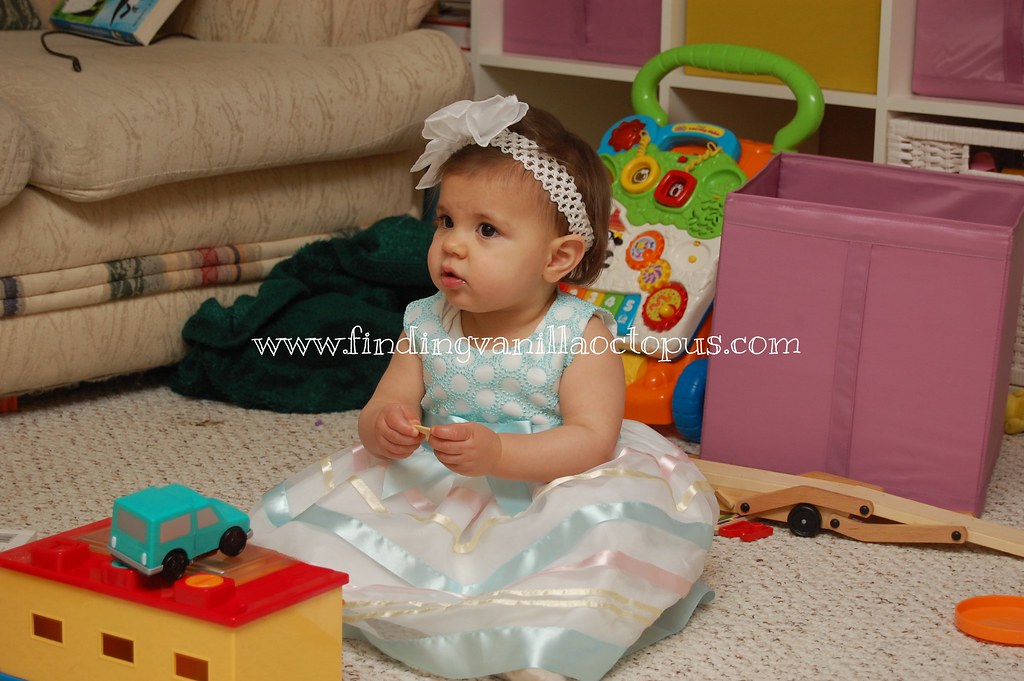 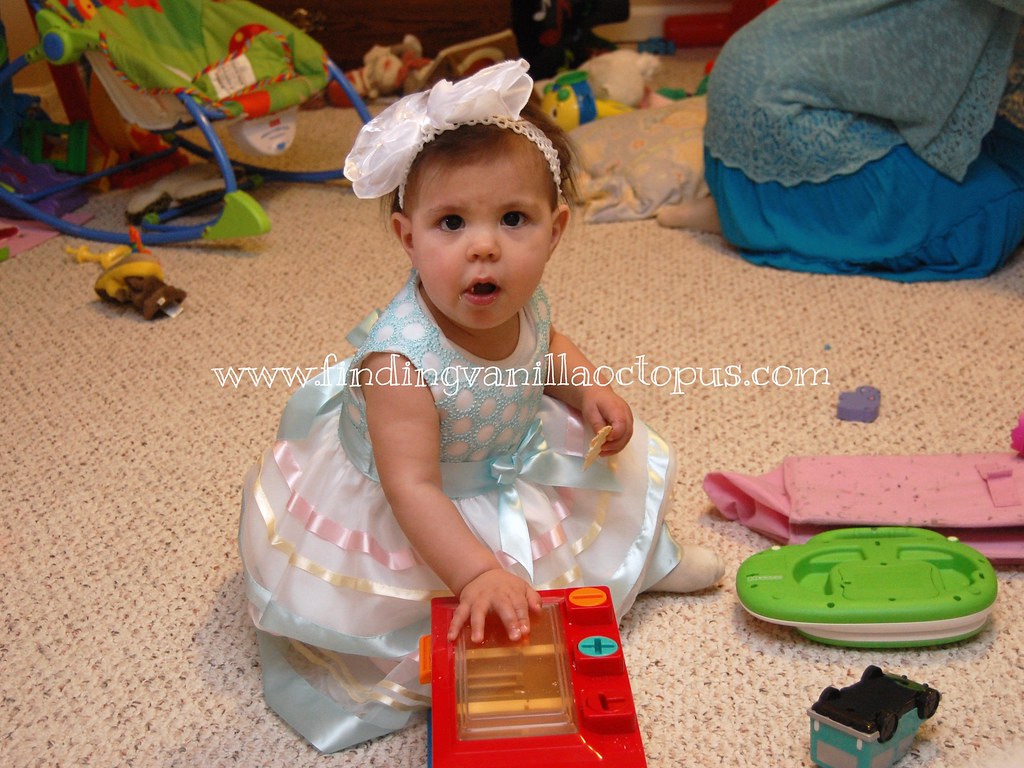 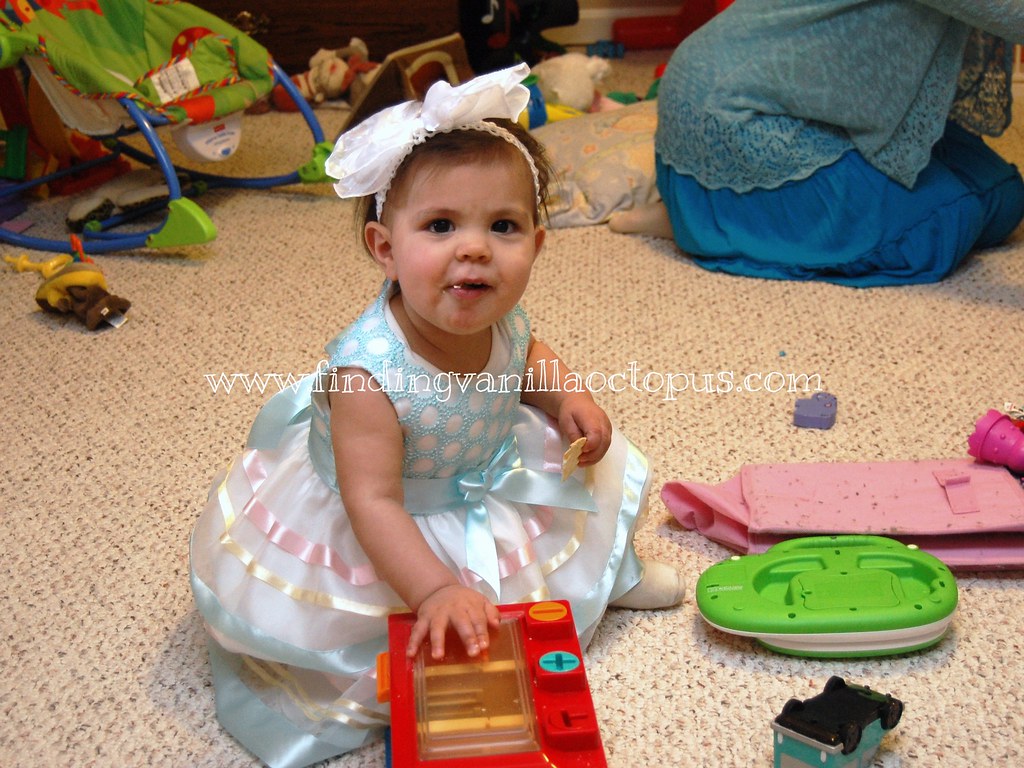 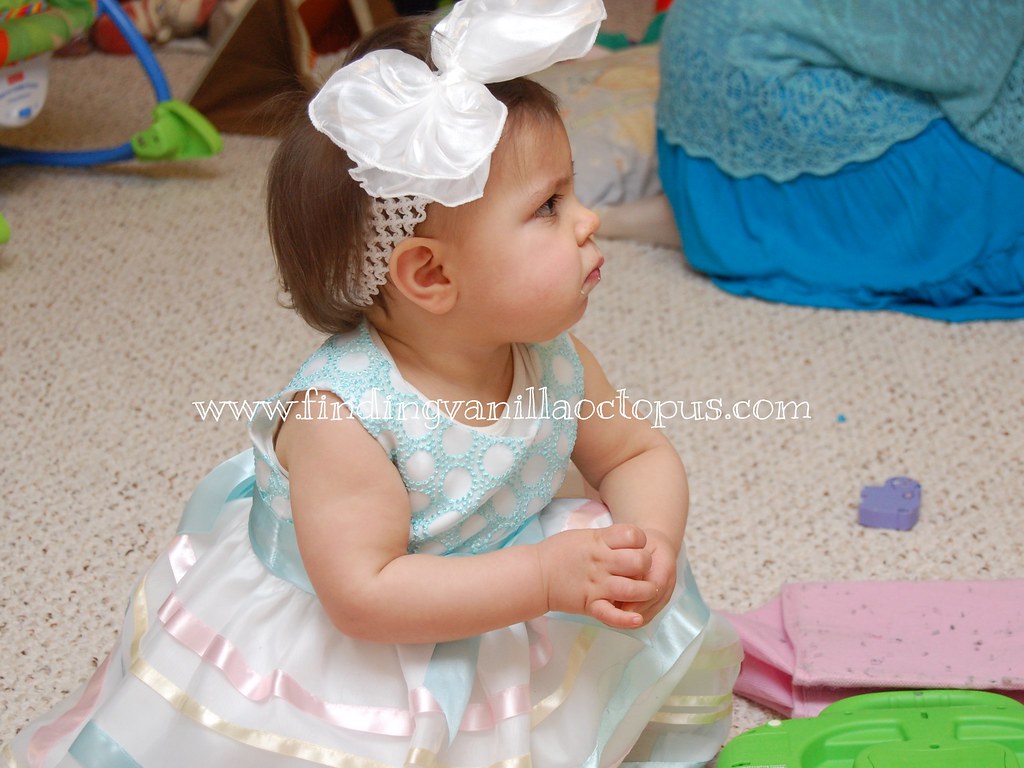 Feeling buoyed by the small successes, I placed her on the loveseat next to Abby for some sister shots. 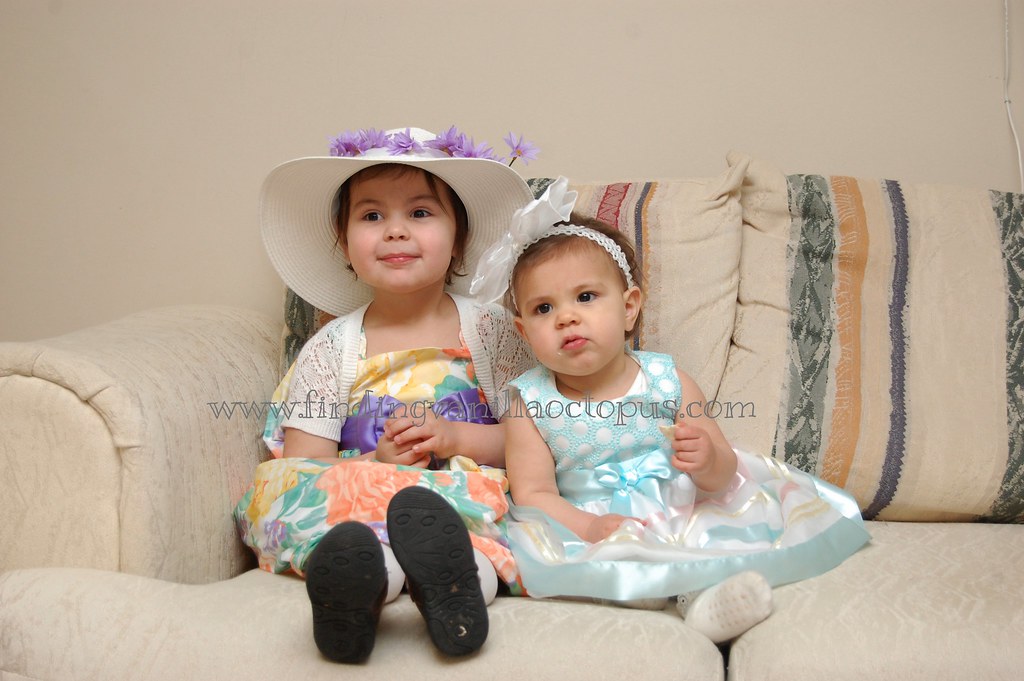 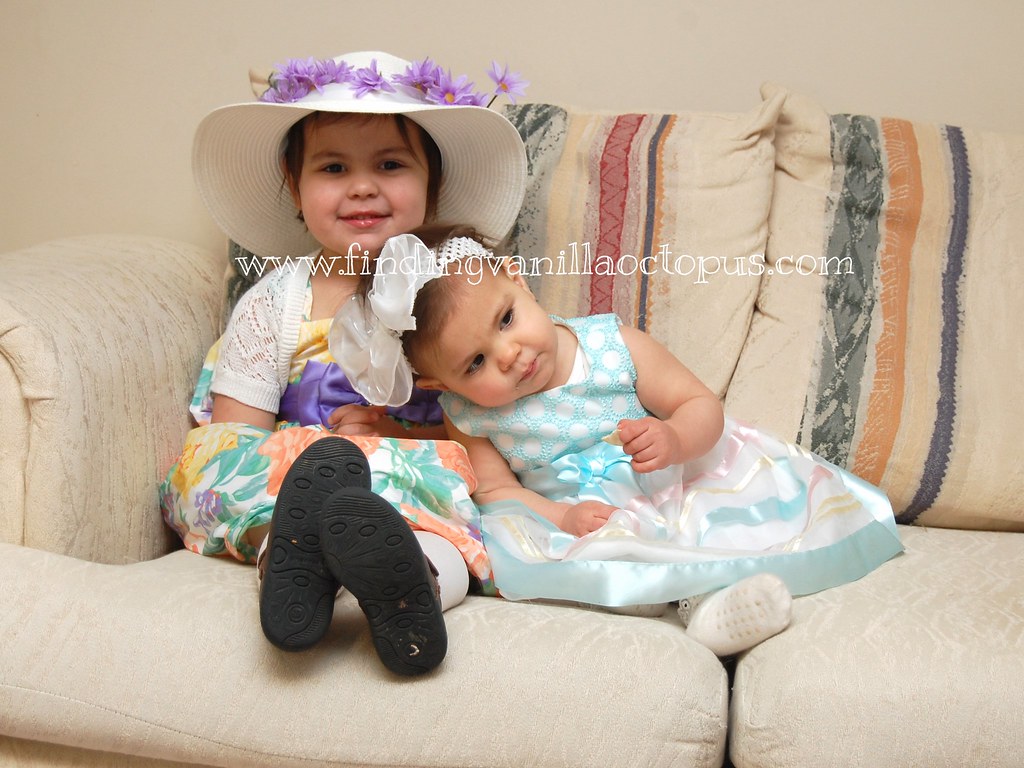 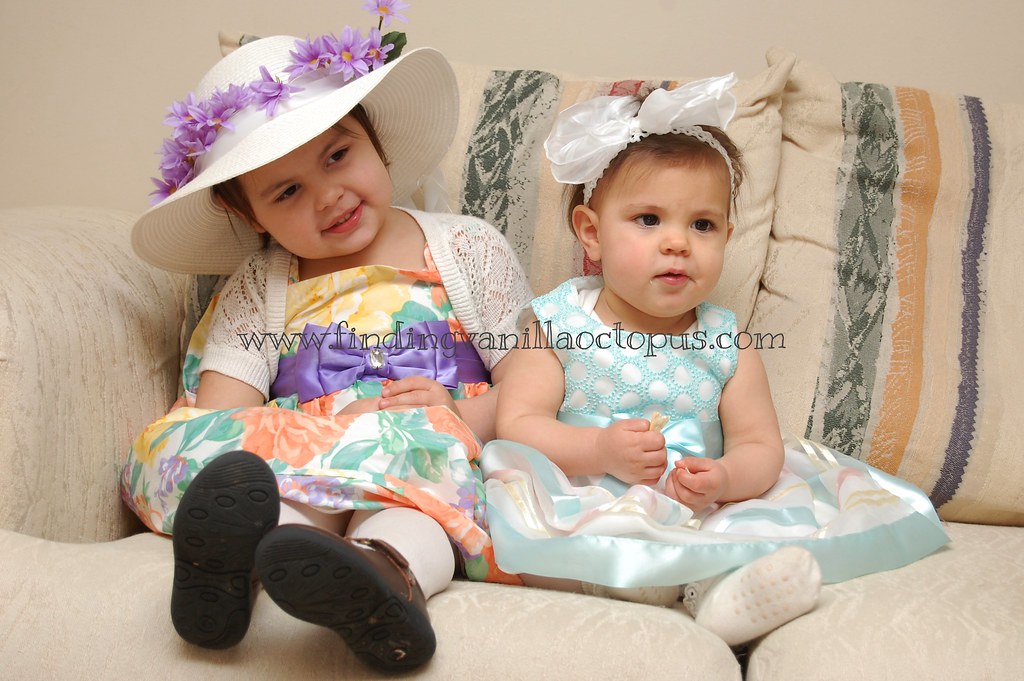 I would have added Michael in if only he'd been awake (unlike Mia, he took full advantage of his naptime). I did start making plans to try again once he joined us, until this happened:

Abby got a little excitable with Mia, who suddenly got a strange look on her face. 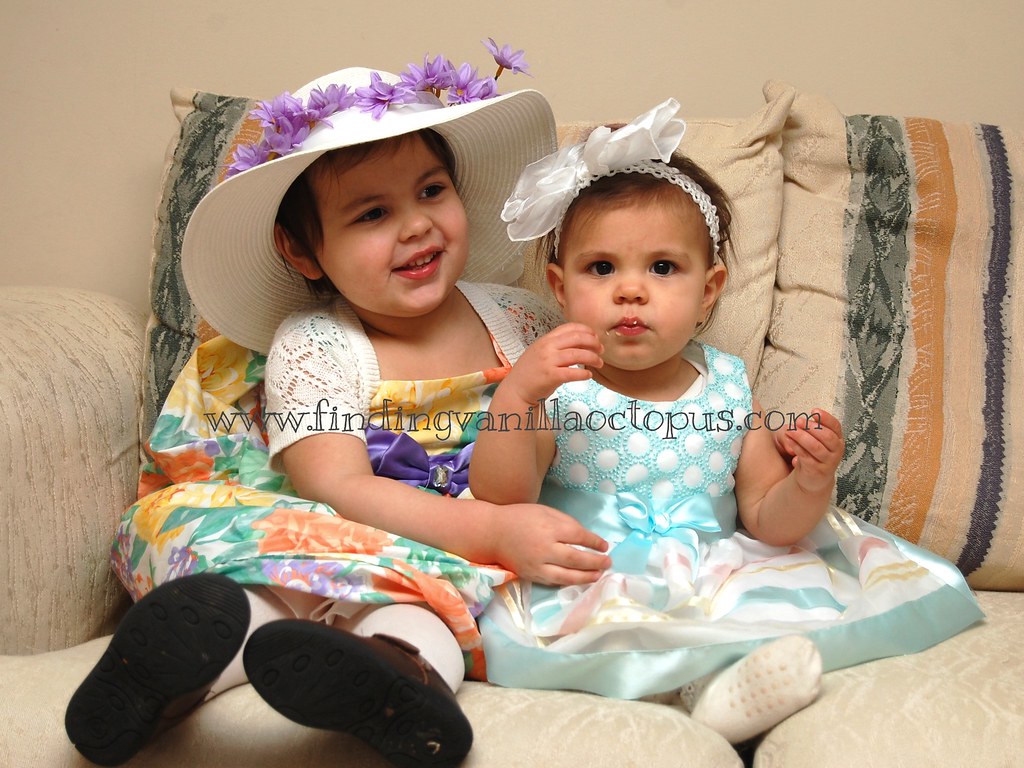 The look led to a breakdown, which quickly erupted into a meltdown of epic proportions. 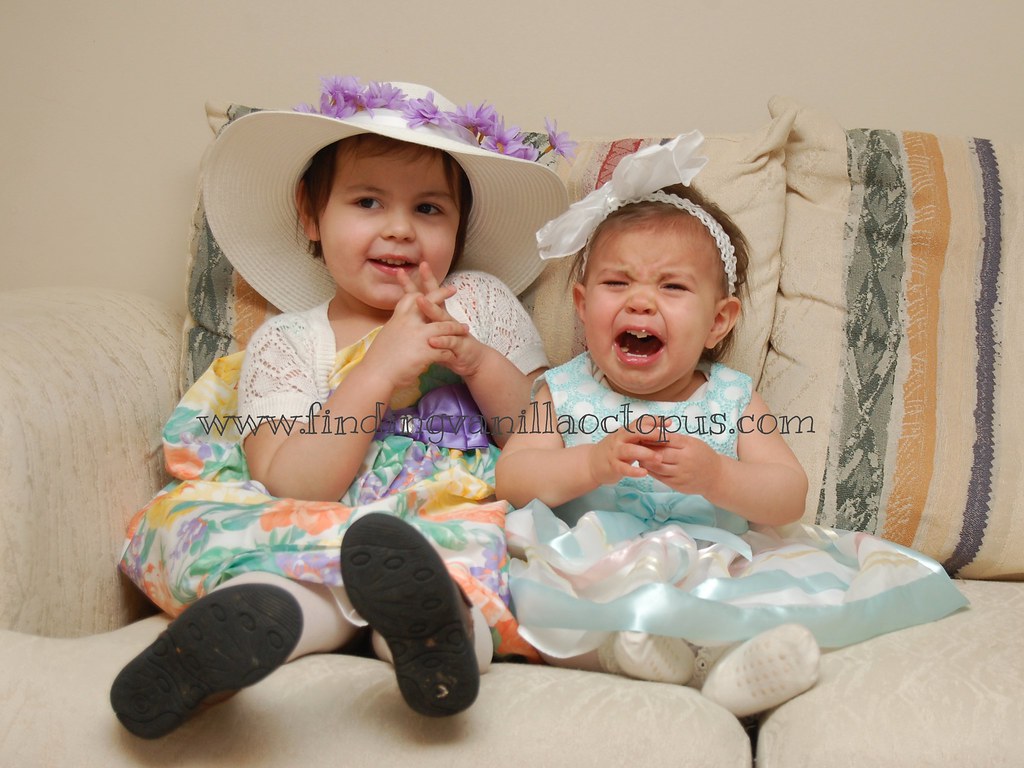 Ultimately, the true cause could have been a combination of any number of factors: Abby's overexuberance, the abundance of visitors, the lack of proper nap time, the odd schedule, the uncomfortable clothes. In the end, whatever ailed her, after an outfit change to something more comfortable and many, many minutes of soothing, she was A-okay again. 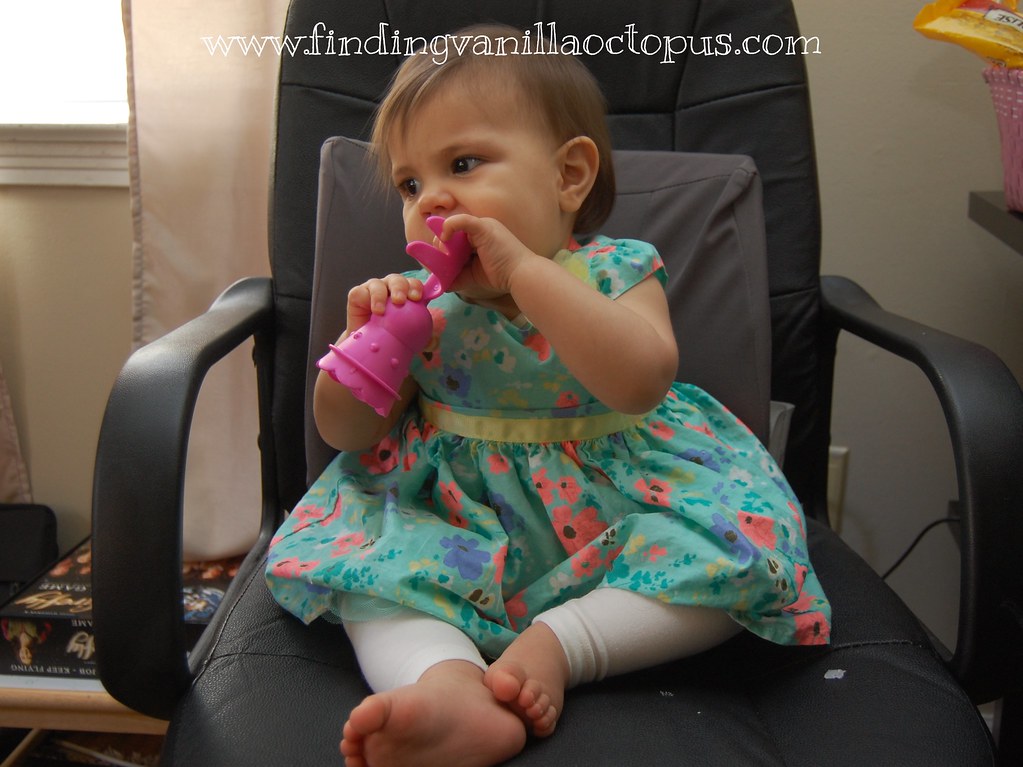 Around this time, Michael finally rejoined us. I didn't bother to try posing him in his wrinkled, disheveled (and yet, still dashingly handsome) state, especially given that his younger sister was no longer in her special Easter garb. However, I didn't want him to be missing from my digital record of the day, so followed him around a bit and tried to include him in some candids. 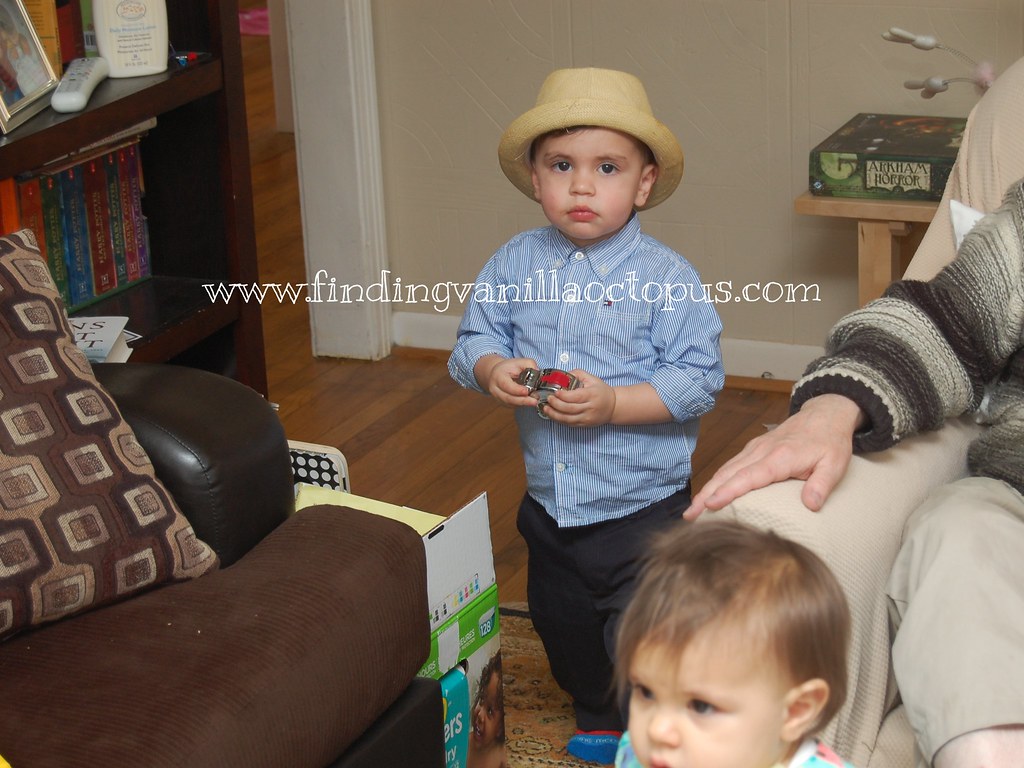 I did try to start angling for a casual shot of all three, but just as I got one, Abby fell backwards off the sofa and set off a new phase of temporary chaos. 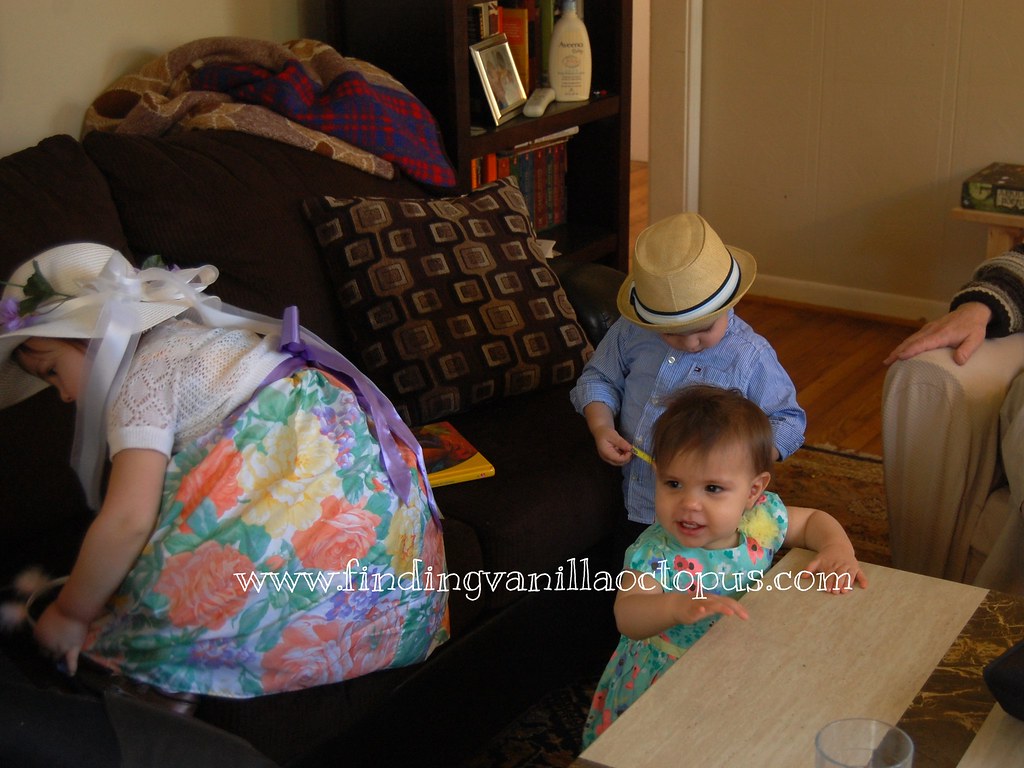 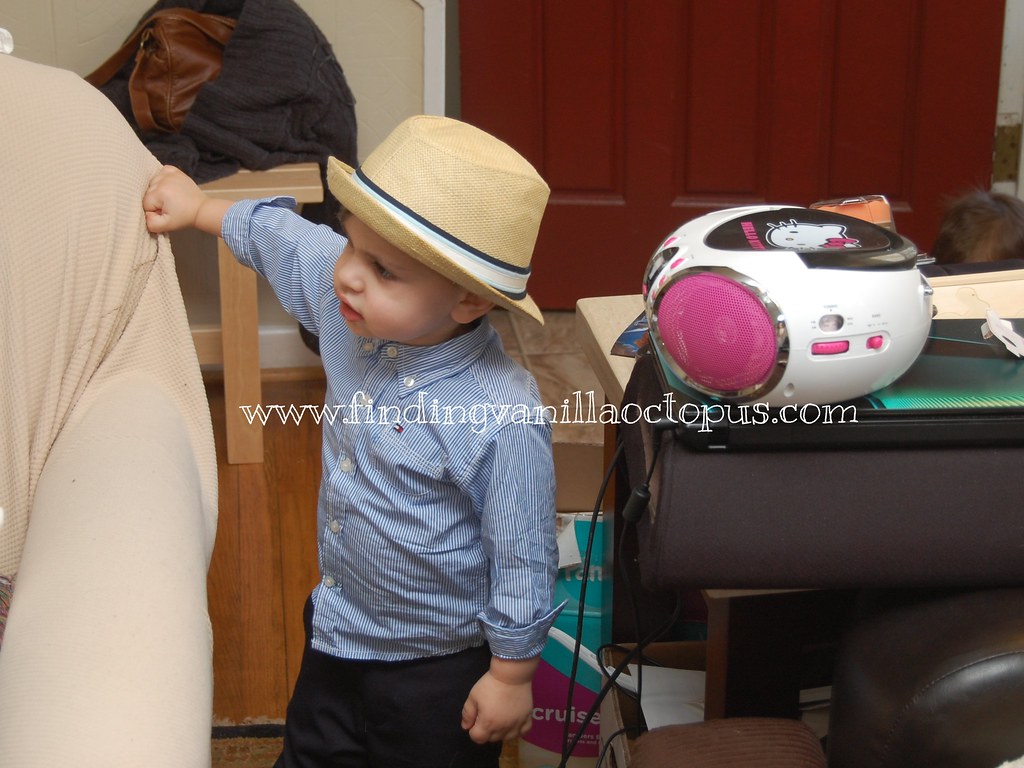 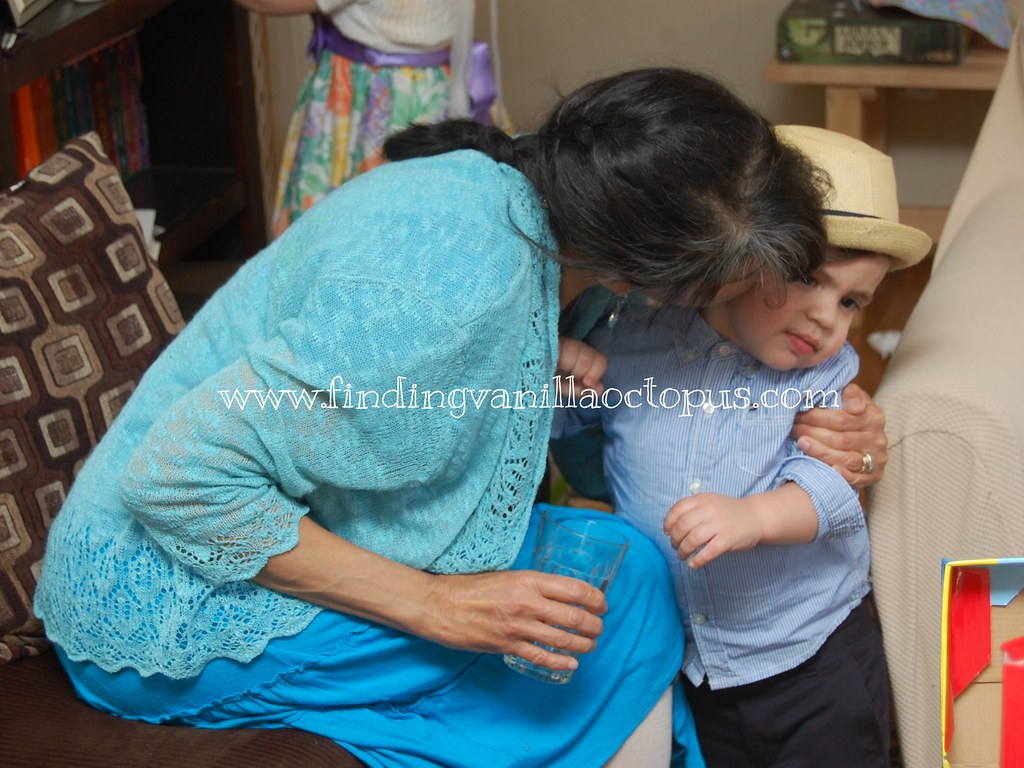 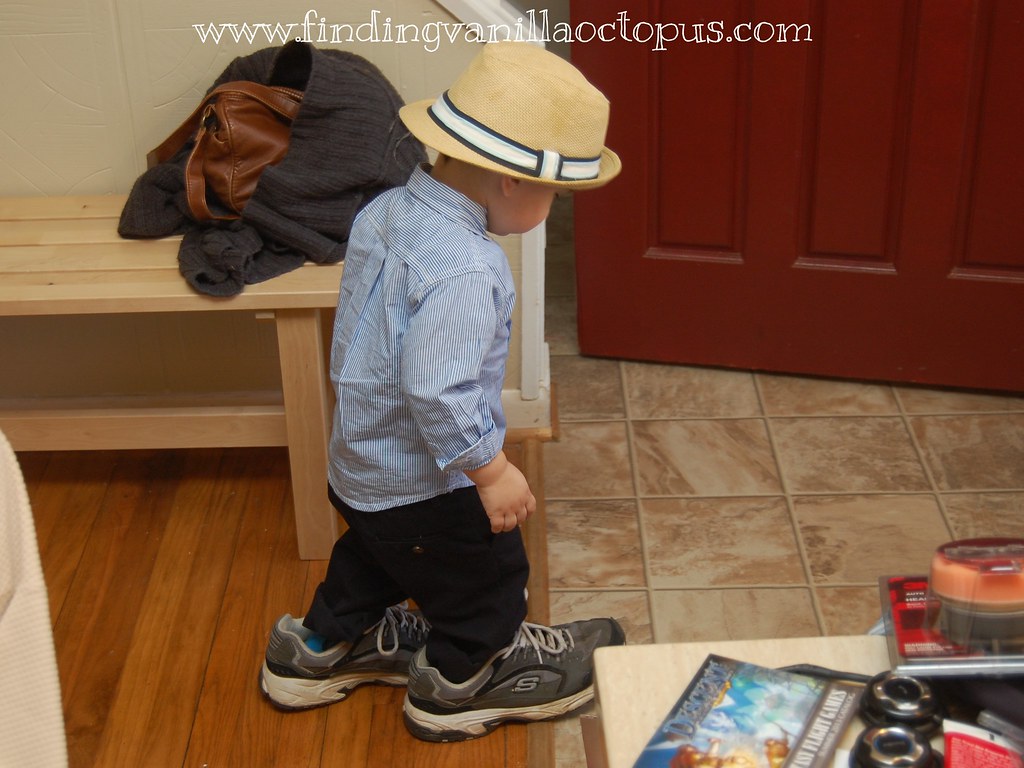 After a successful dinner had been enjoyed by all, I realized that I never did set up the egg hunt I'd so longed to do. However, supper had been sufficiently early, and the mid-spring days are now sufficiently long that there was plenty of daylight to work with yet. I hurriedly rushed out and strategically placed the ten plastic eggs we'd bought last minute throughout the back yard.

I worried that the kids would not understand the point or that they'd be disappointed that I'd never found something to fill the eggs with in time. My worries were unnecessary; one look at the joy on the children's faces as they quickly caught on to the game was more than enough to cast any fears aside. 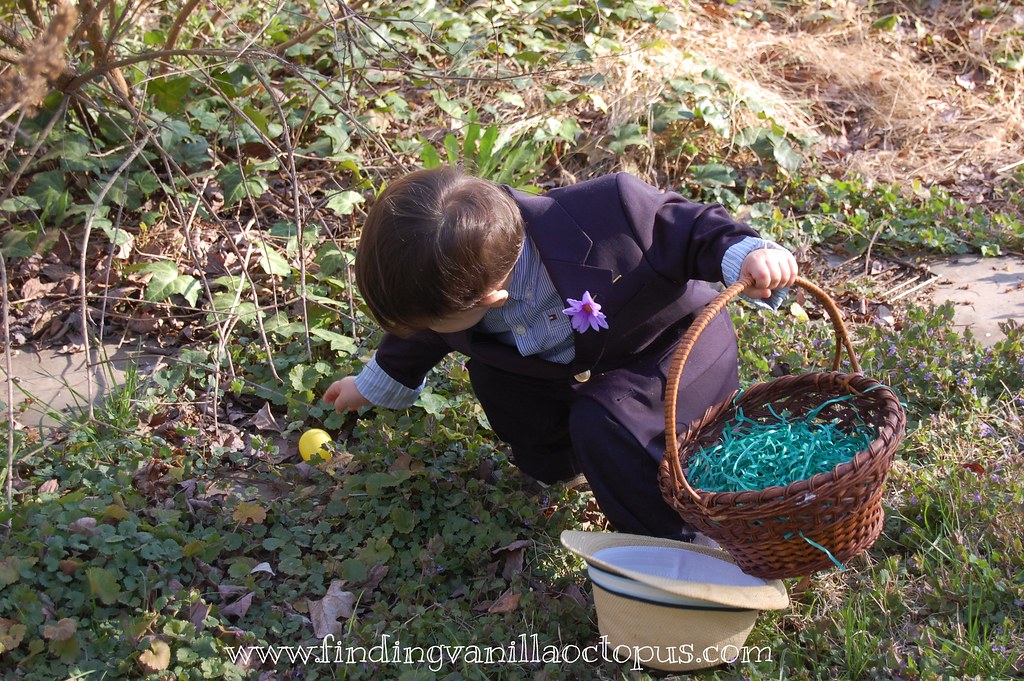 And though I was not quite ready for this moment, I'm glad I caught it, at whatever level of quality. 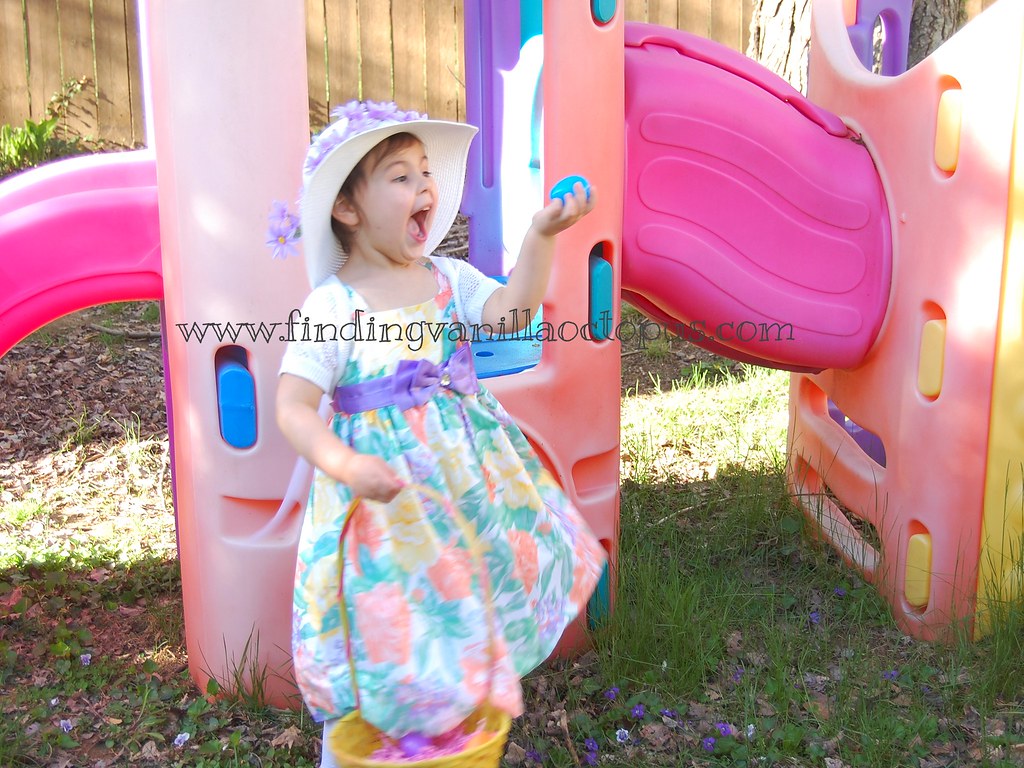 Ditto for this one. Of course, I realized shortly after taking it that part of the problem was the manual setting I'd left the camera on, with too slow a shutter speed for the light level and action of the situation I was working in. 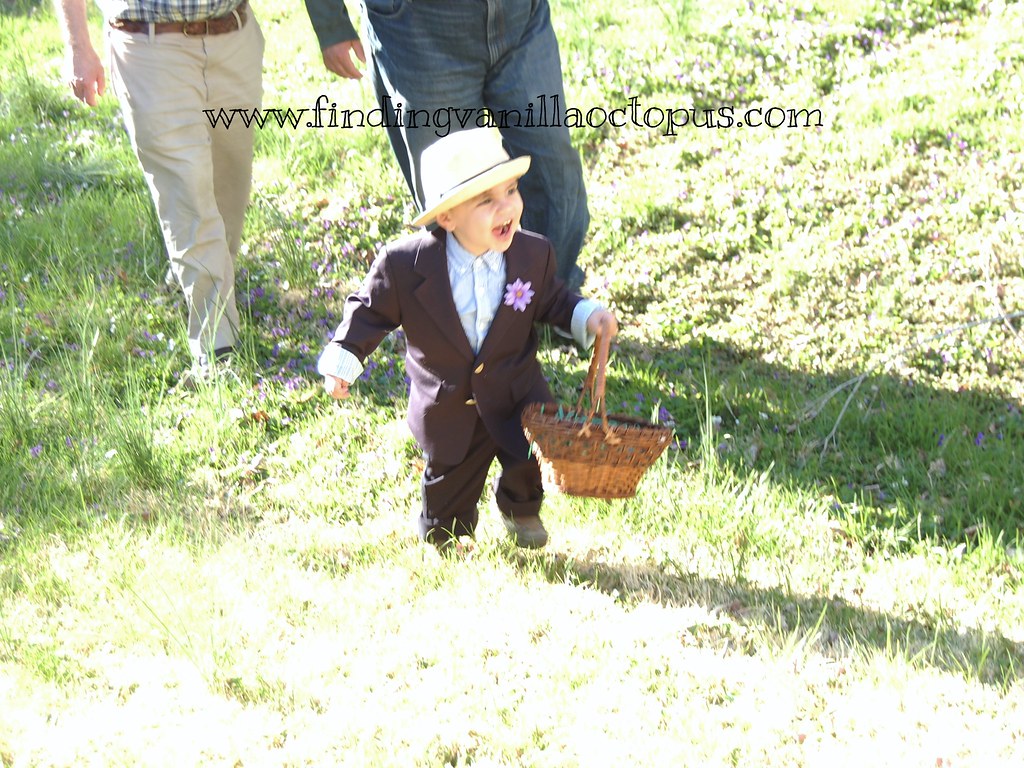 Though Mia was far too young to understand or participate, she seemed to enjoy the role of observer well enough. 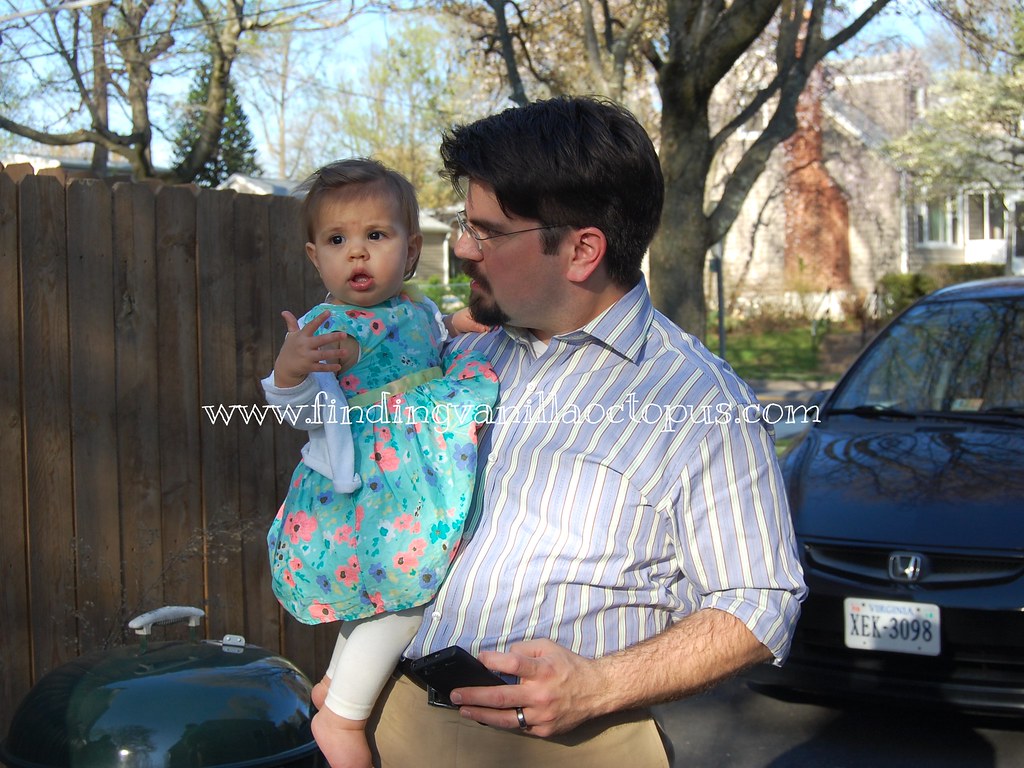 As for her siblings, the fun went on long after the last egg was discovered. How could it not? The day was perfect, the sun low but bright, and the once-ordinary backyard had been suddenly transformed into a place of magic and wonder. They were eager to continue the exploration. 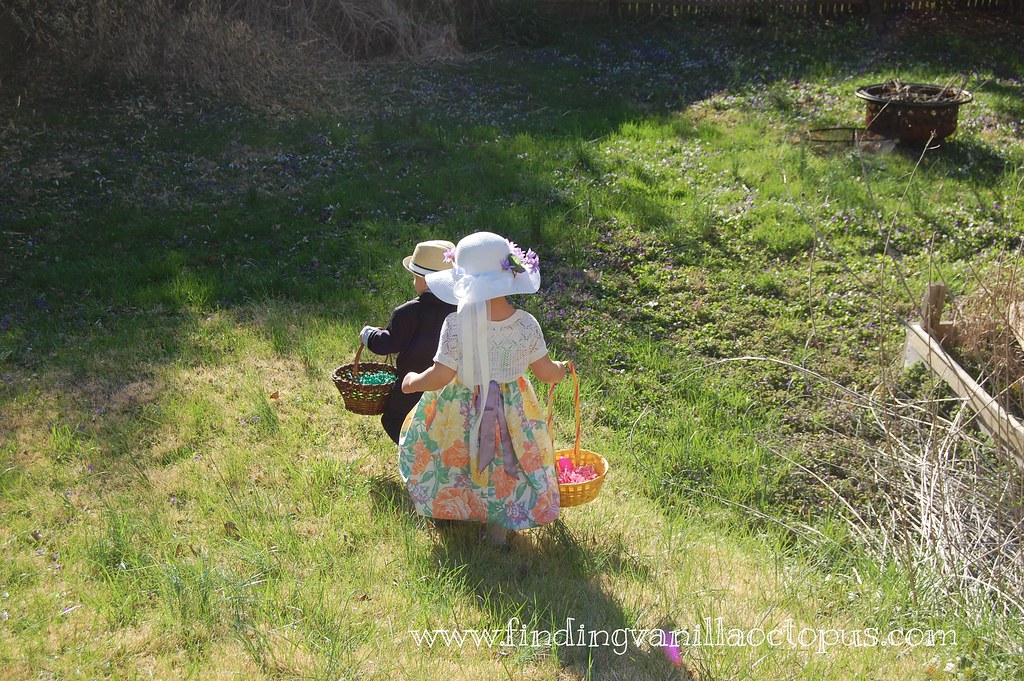 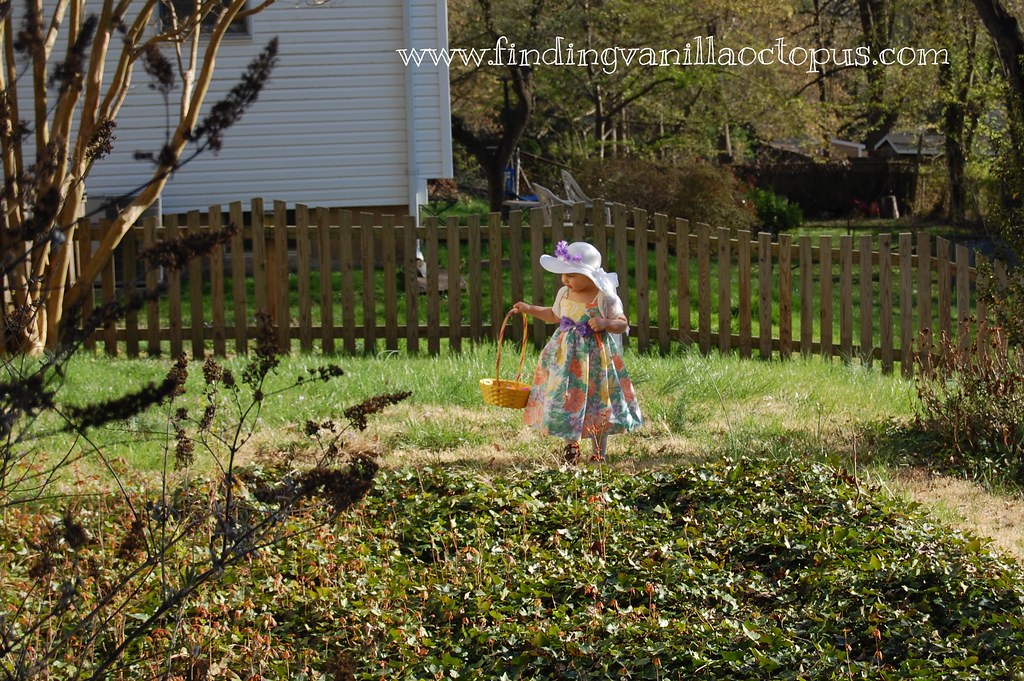 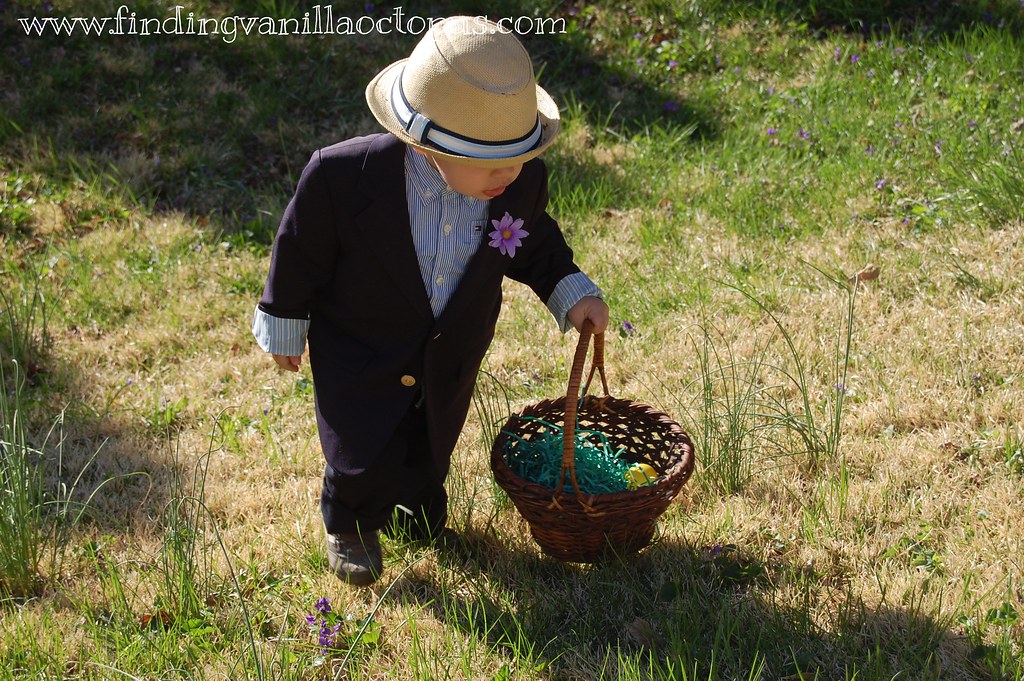 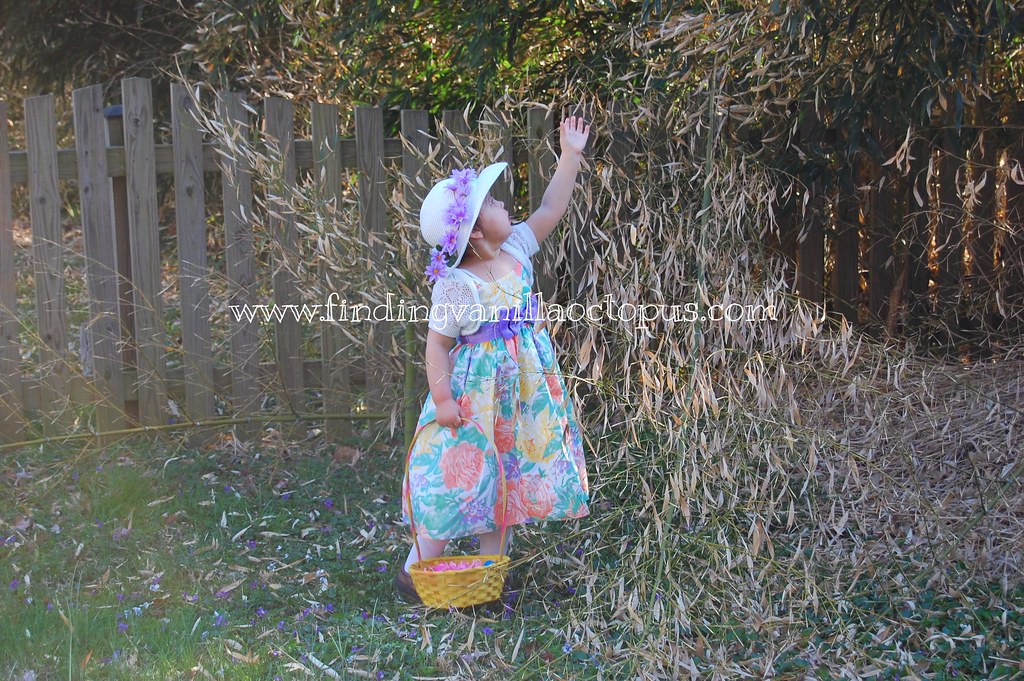 And as for me, I was caught in that same old balancing act: trying to record each captivating moment, both in memory and on film, and all the while attempting to be present for it all.

I'd say my efforts paid off. I finally got a picture of my favorite little man in his Easter suit. 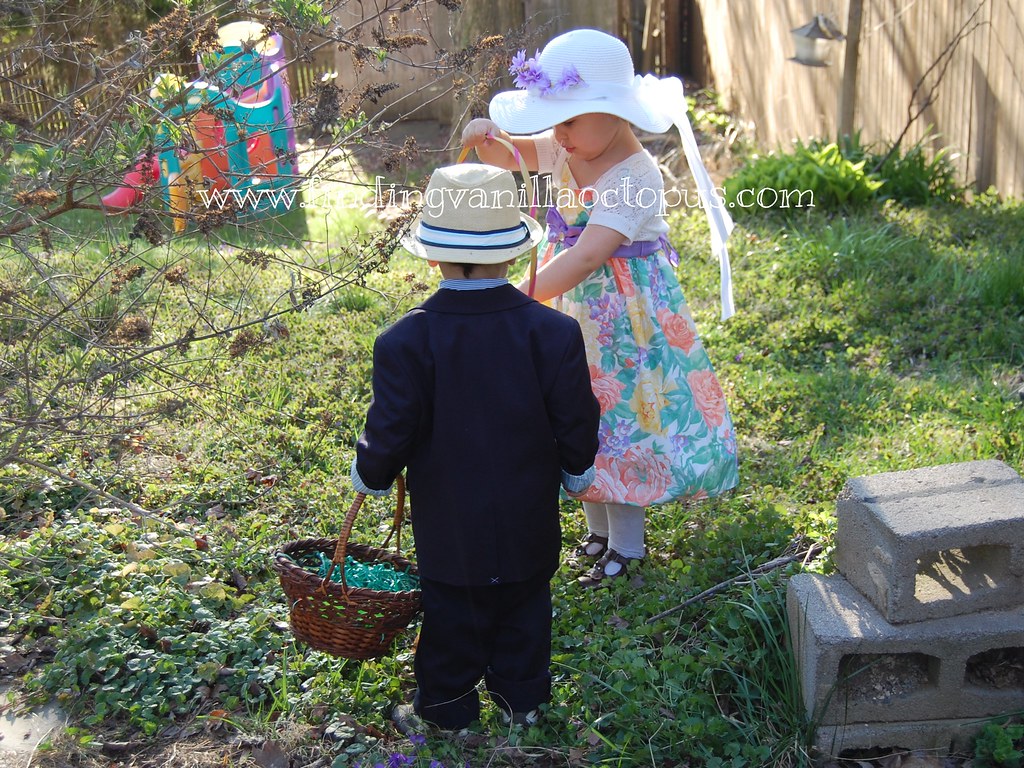 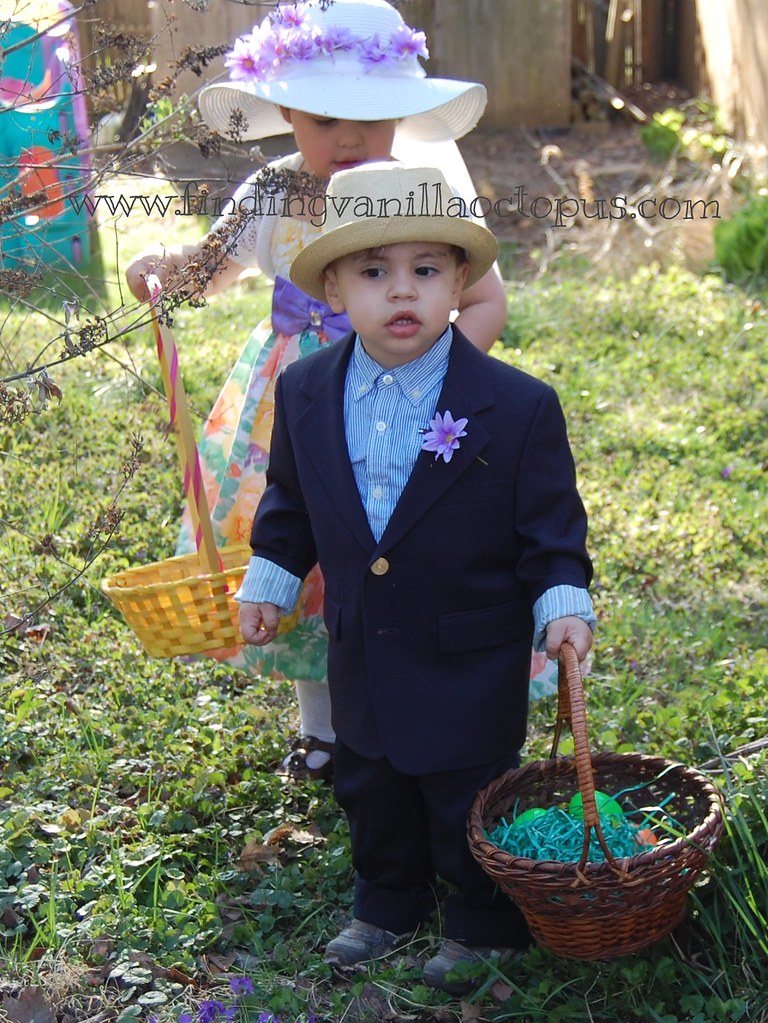 What an Easter.
Posted by Unknown at 8:54 PM