I know I'm not the first person to ever have made the unfortunate connection between infants and vampires (they don't sleep, they're constantly "feeding"), and toddlers and zombies (they sometimes bite, have got the whole unsteady walk thing going, and are prone to gnawing on things, including human flesh), or even toddlers and sociopaths (they're not too good at caring about anyone outside of themselves just yet, have little regard for rules, and tend to "lie," though- to be fair- it's not like they really know that's what they're doing).

I'm also all too aware of the expression, "Kids say the darndest things," but while Abby's had her share of humorous outbursts, I believe that today marks the first occasion in which she's ever actually said something creepy.

There she was, scribbling away on her magna-doodle until she'd gone over every inch of the screen, when she announced: "This picture makes me happy." She held it up for her father to look at. 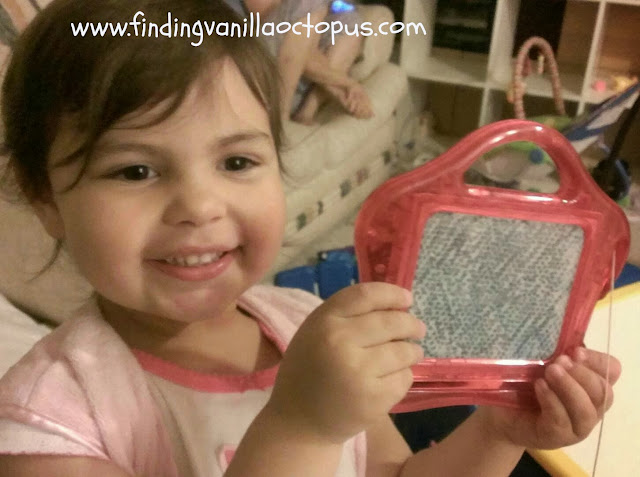 "The darkness," she replied, smiling sweetly.

Her answer, combined with her expression, was too much. Tom and I both erupted into fits of astonished laughter, during which Abby excitedly erased what she had drawn, held up the blank board and said, "This is the empty darkness." 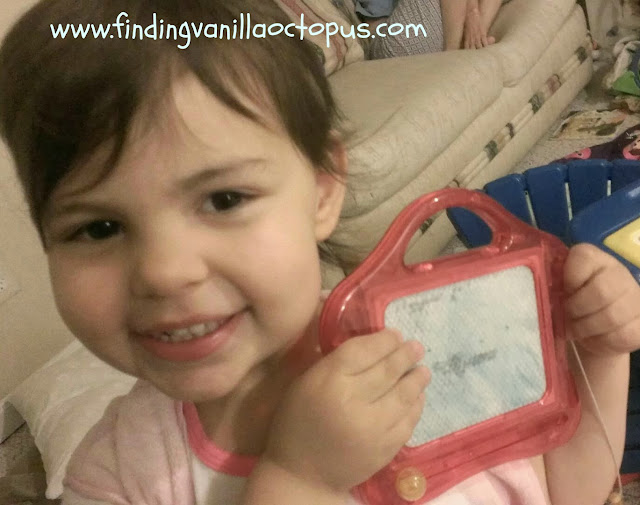 Who knows what was going through her head when she said it the first time (though I'm assuming she was just trying to say that she was proud of her efforts at totally darkening a white board), but her repeat efforts were certainly attempts to recreate that same, huge initial reaction. I can't say I blame her.

When she didn't get quite the same level of interest, however, she stepped it up a notch. "A monster is hiding in the darkness," she clarified. "That makes me happy." I could see her searching my face, trying to get a read on me.

"Does it, now?" I asked, with half-veiled amusement.

She grinned. "Yeah," she said, and turned away to continue doodling.

As I contemplated whether this might be some early indication of a preference for thrill-seeking (after all of her inane early paranoias, no less) or perhaps just some budding interest in the horror genre, or- most likely- a reference to a movie she's heard about but not seen (Monsters Inc.), Abby was busy doing a total one-eighty.

I looked up to see a new picture held out in my sight line.