One-year-old cherub, in the white chair
Sweet little baby, tails in her hair
When she goes diving, how she will fall
And down will come Mommy, camera and all...

I got some beautiful photos out of this last attempt at Month pictures, but there was a price to pay, unfortunately.

I should have known better than to put her up on furniture without Tom nearby to spot, but I wanted just a couple quick shots for a one month to twelve month comparison, so the chair is where we started. As it turned out, those first two shots weren't bad, but I was feeling unsatisfied with the look of the flash, so I switched to manual and started trying to use natural light instead. 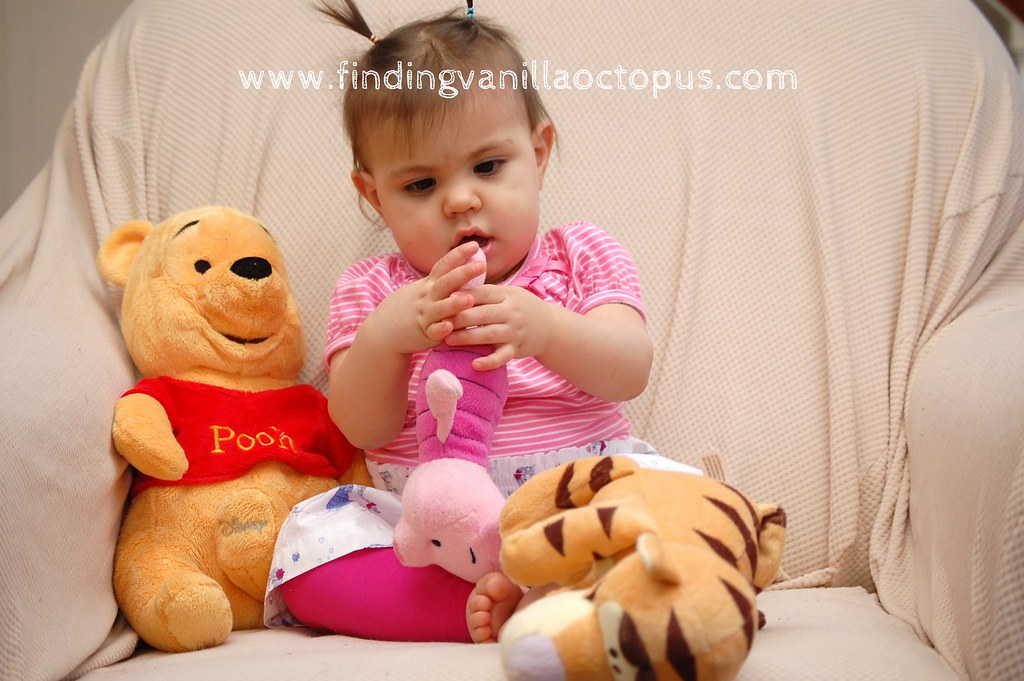 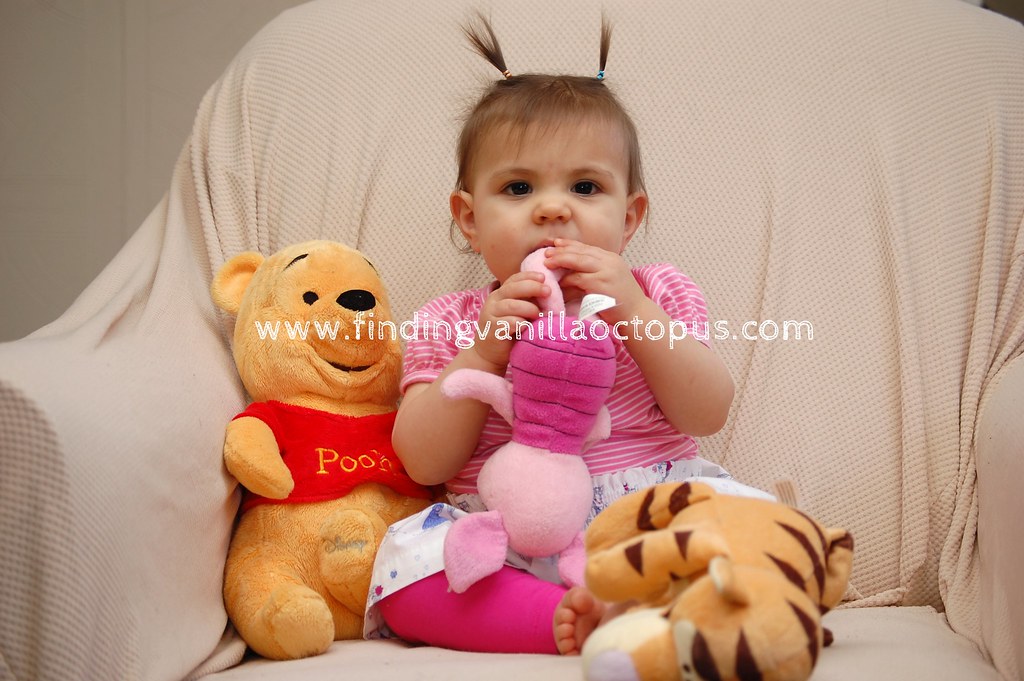 Mia took full advantage of my divided attention and began attempting to climb over the back of the chair. 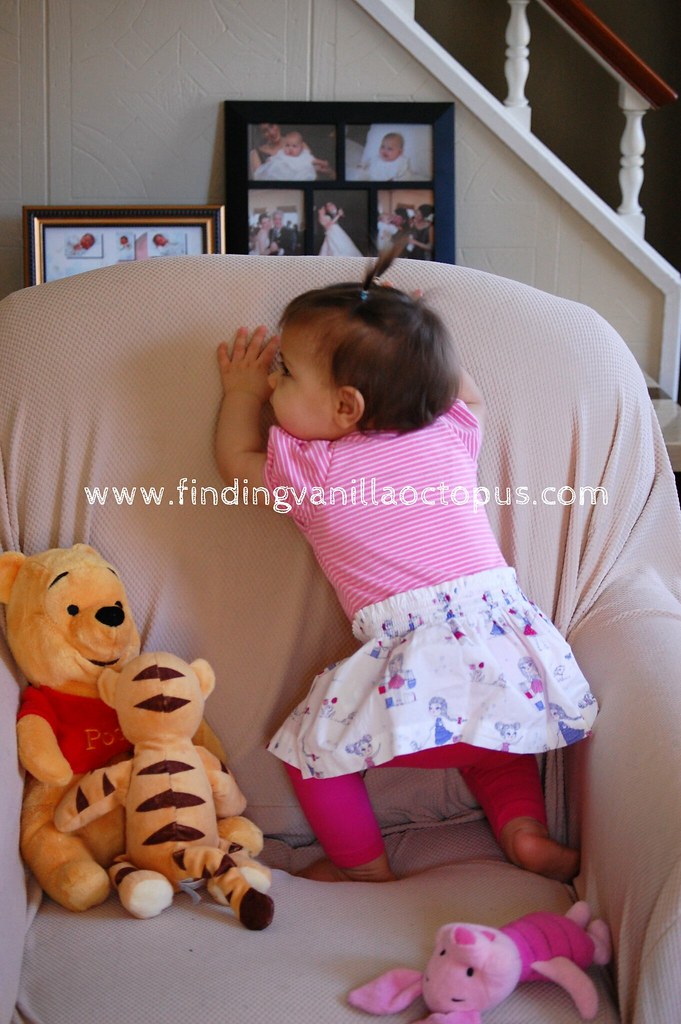 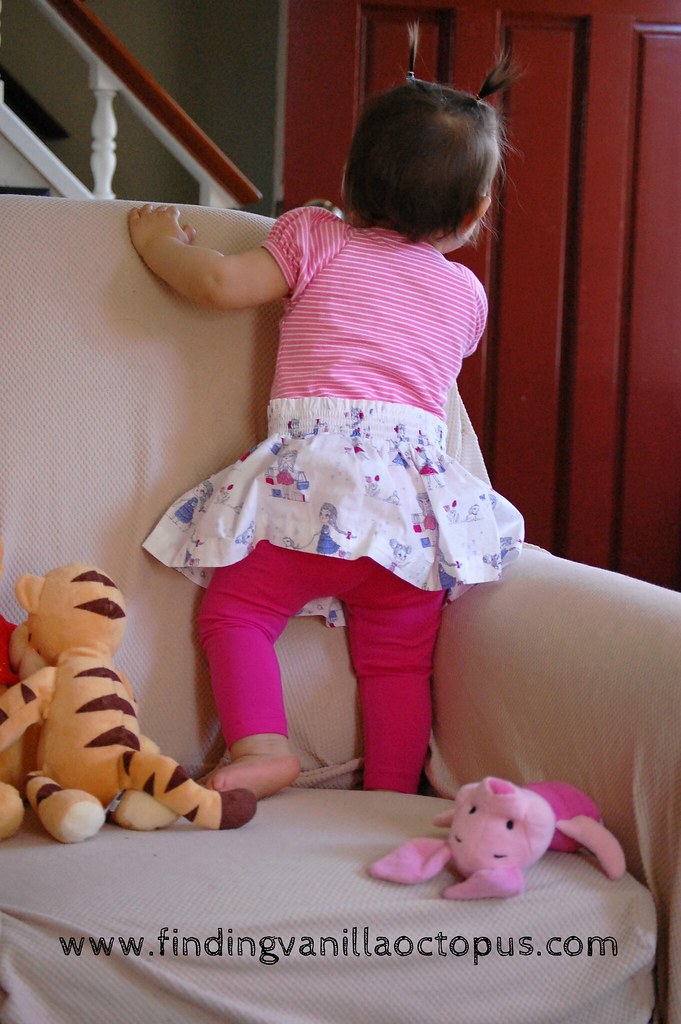 I quickly realized that I couldn't fiddle with camera settings and keep her from landing on her head, so I put Mia down on the floor and followed her around for a bit. 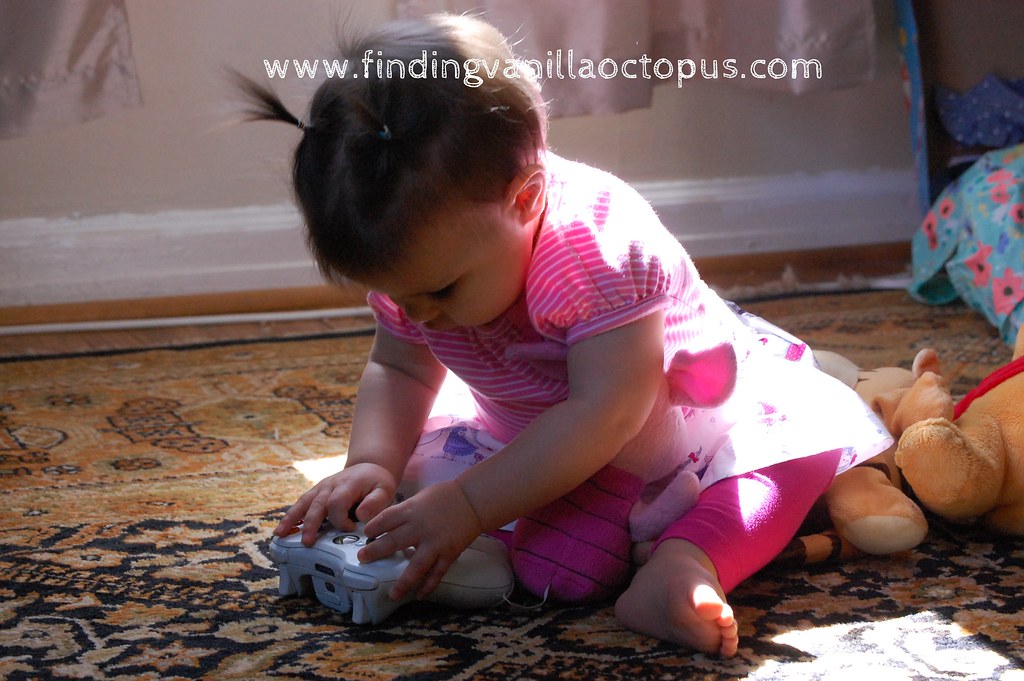 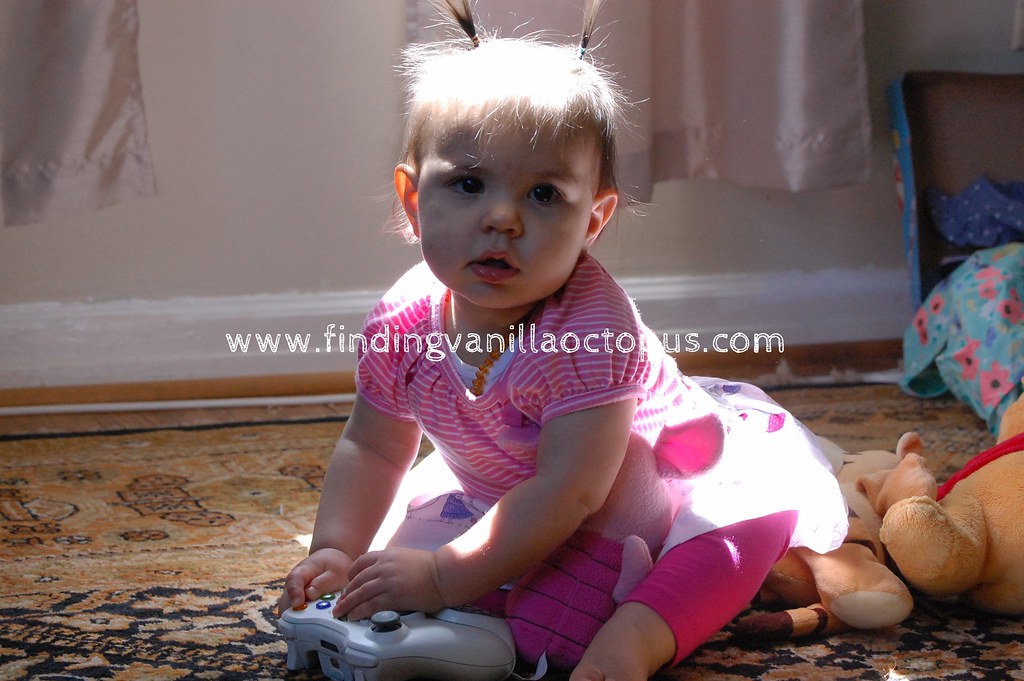 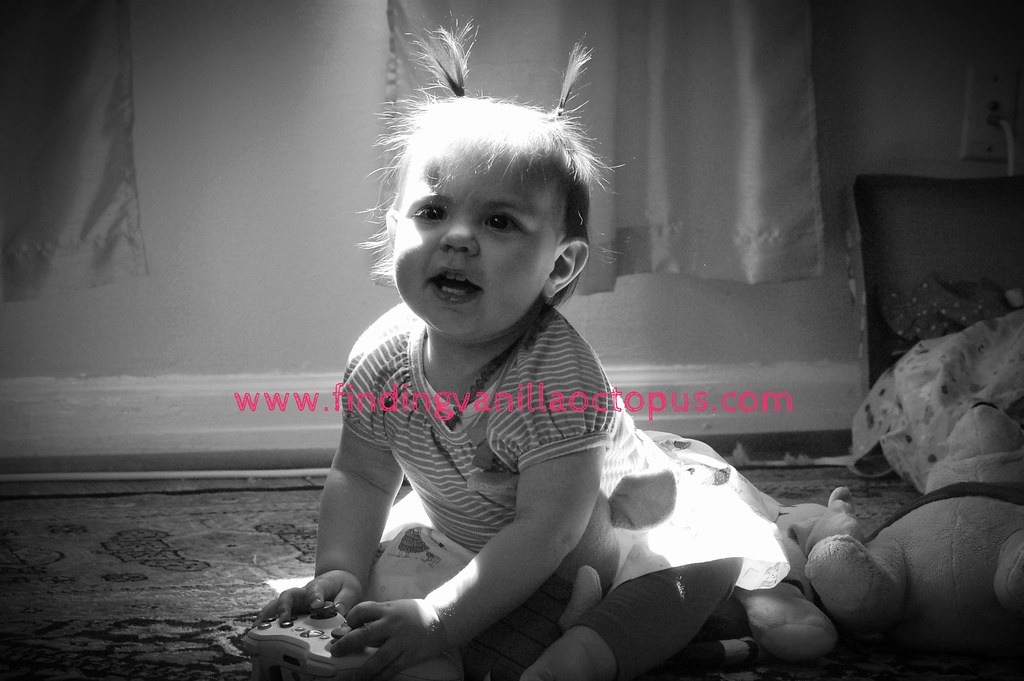 Once she found the X-box controller, however, she was pretty content to sit in one place and mess with it. Since the location she chose was directly in the middle of some pretty hardcore sunlight, I had to shift her over a bit, and she continued on with her fixation.

She did allow me to distract her into looking at me at this point, which was excellent, but I began to find that from my new vantage point I couldn't quite fit her in the frame. 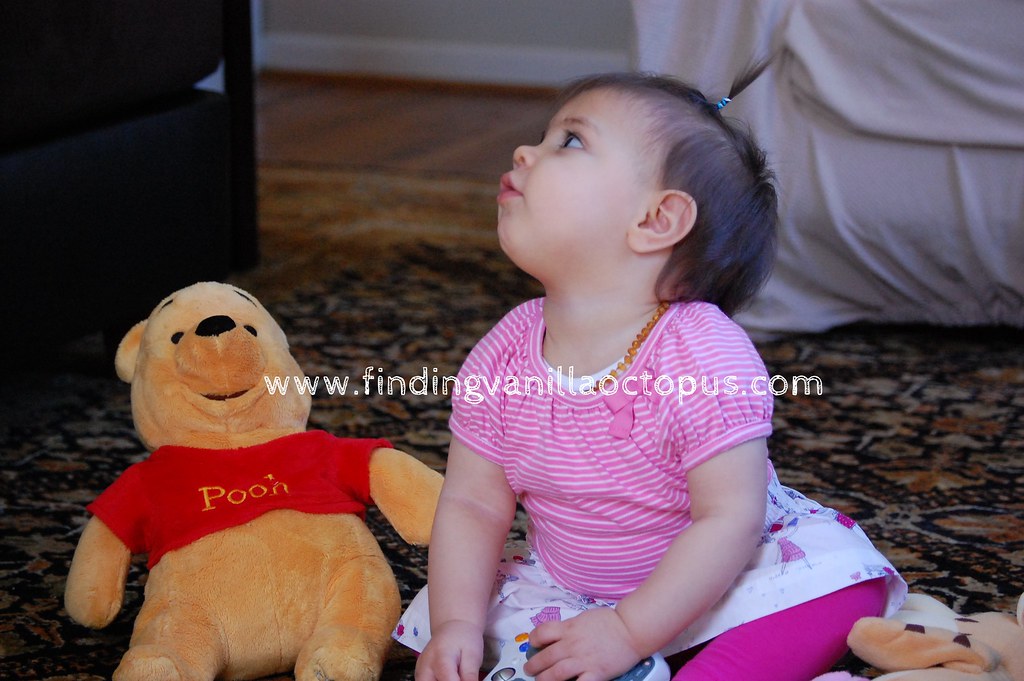 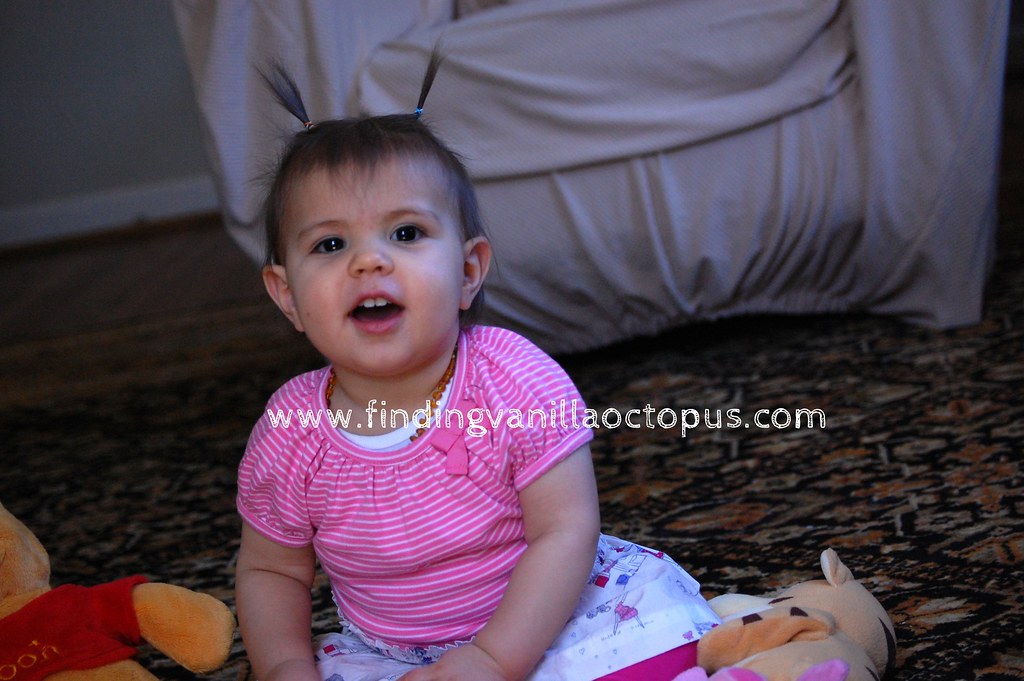 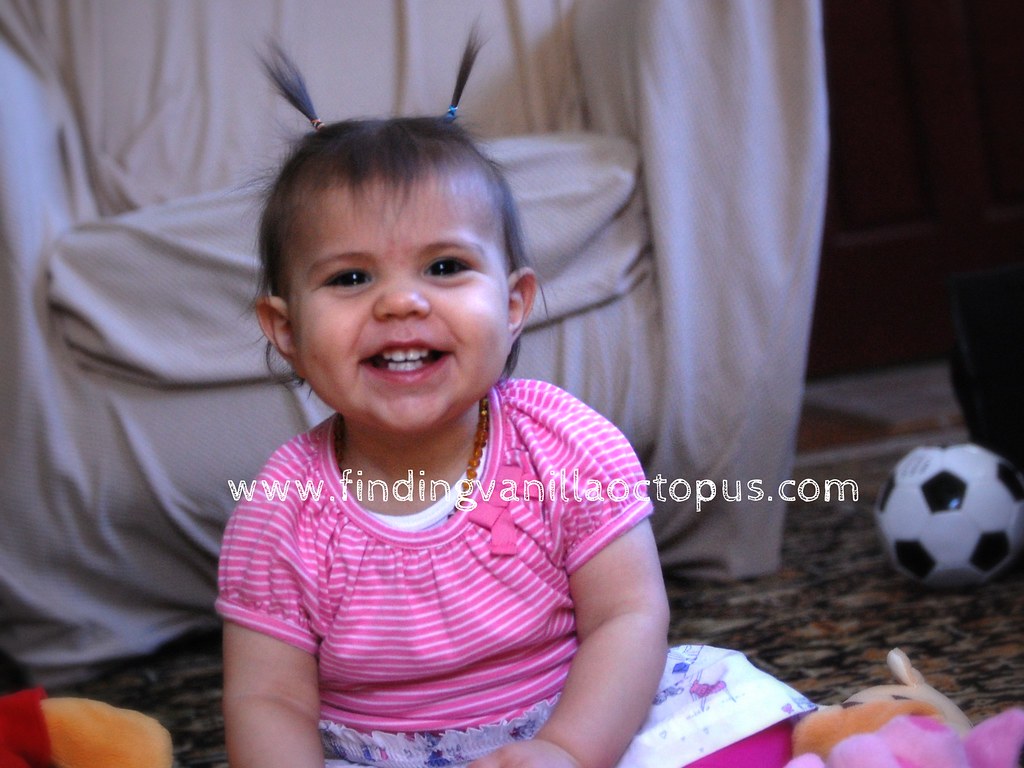 So, I played around with a couple of different angles, and took some closer shots. 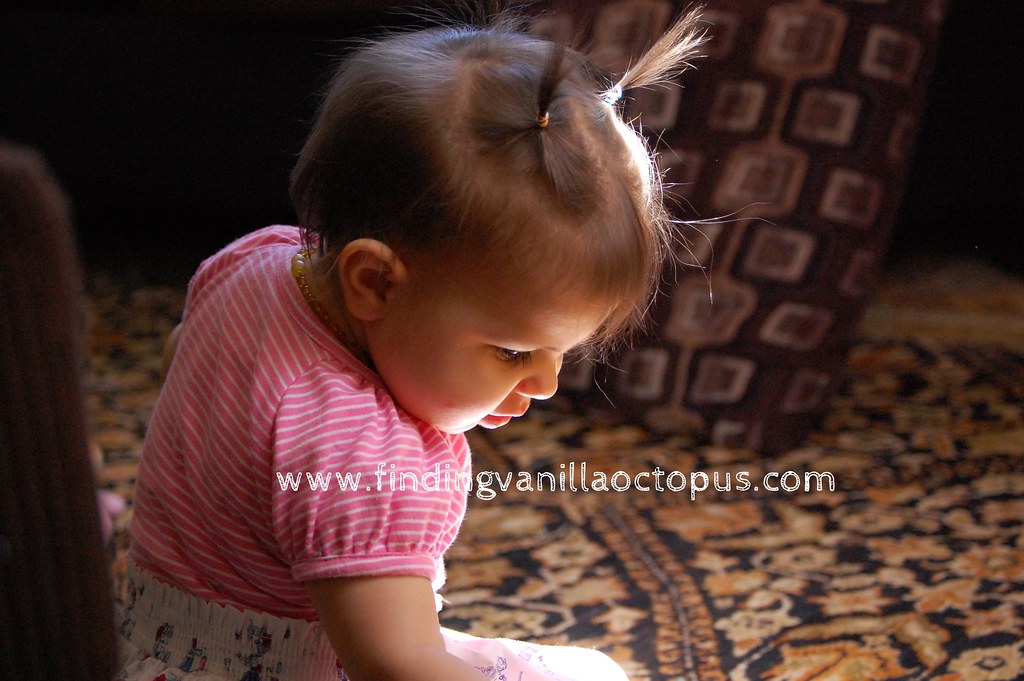 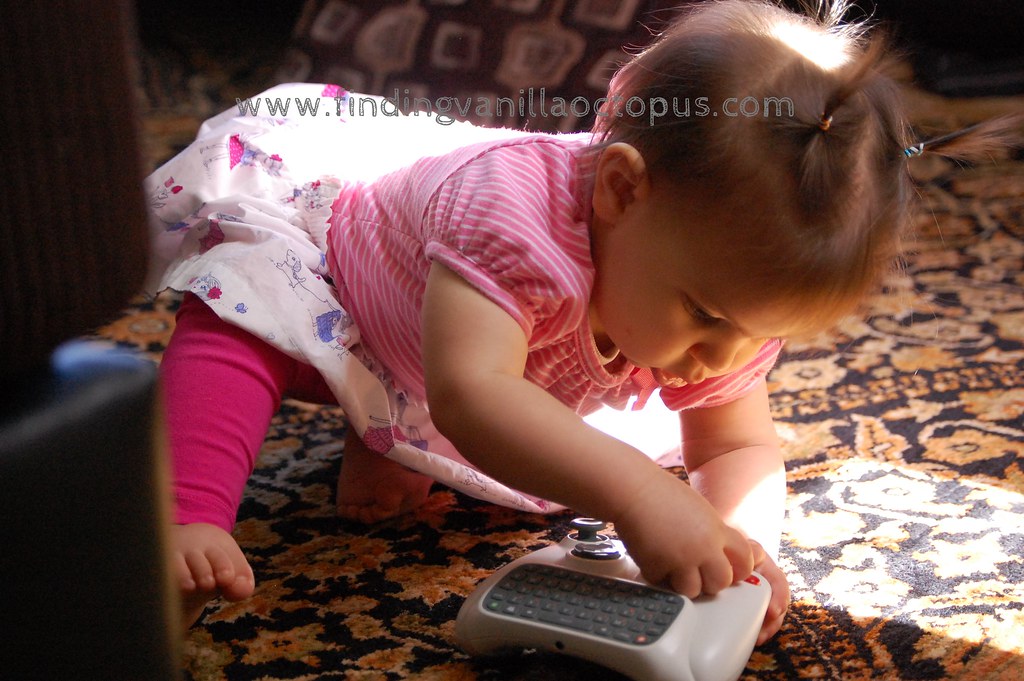 Finally, I found a good spot to set up for a full-body shot, and what should happen next? 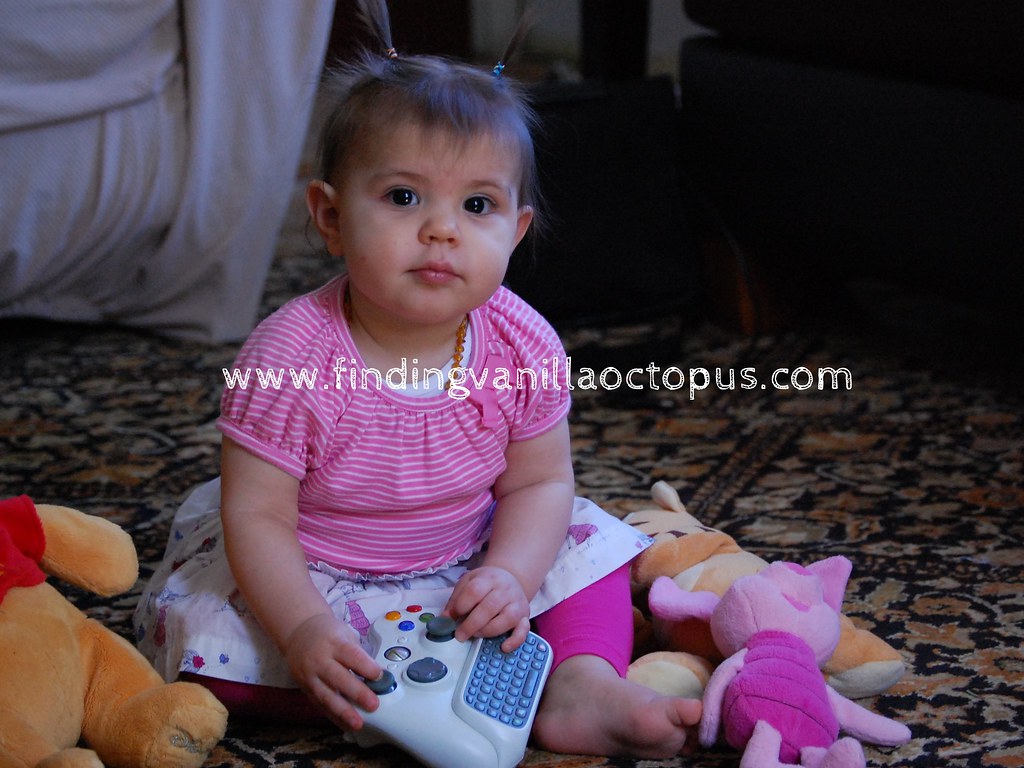 Someone tried to literally eat the controller. She actually bit a piece off of one of the joysticks. 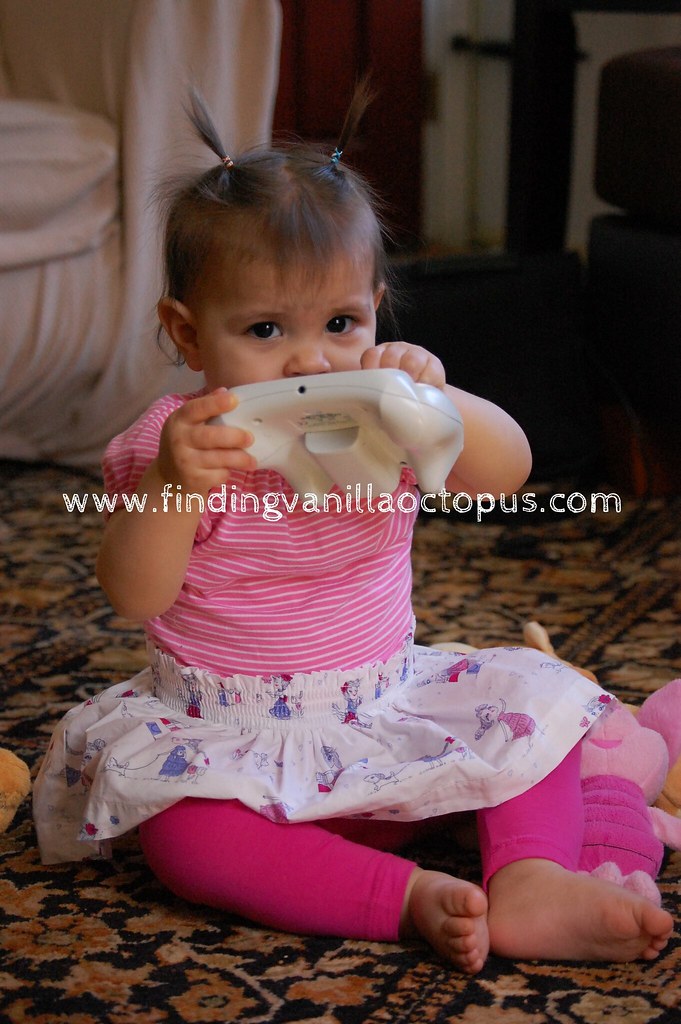 Here she is, looking marginally penitent (and very drooly) for just a moment before setting off to get into trouble again. 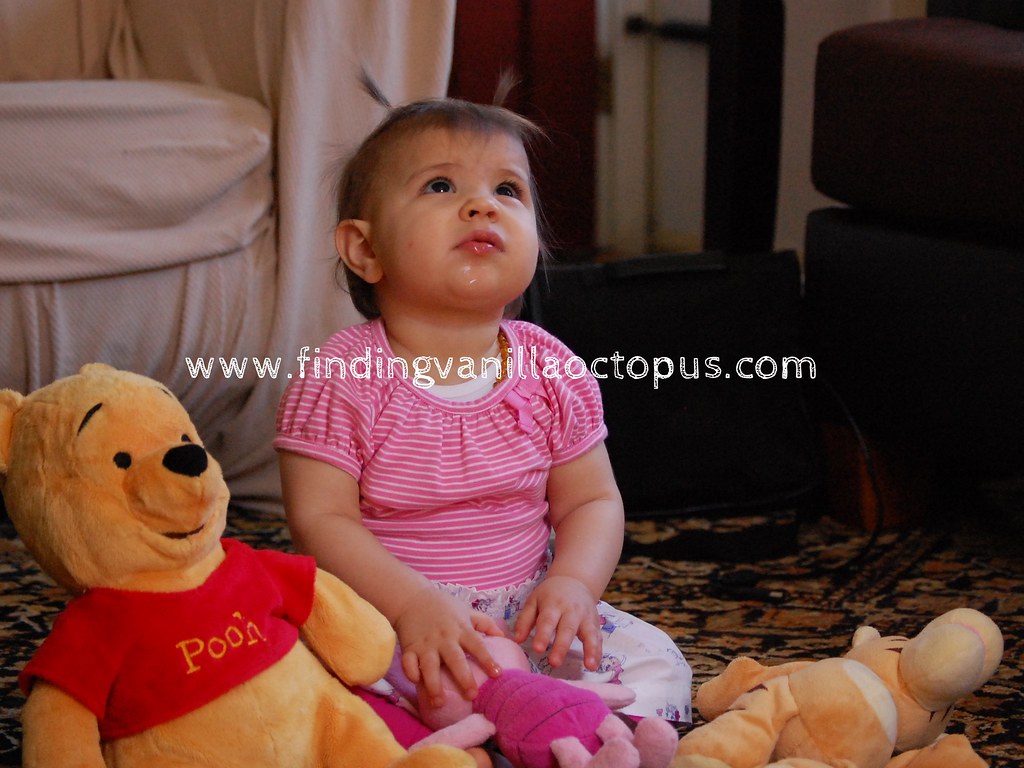 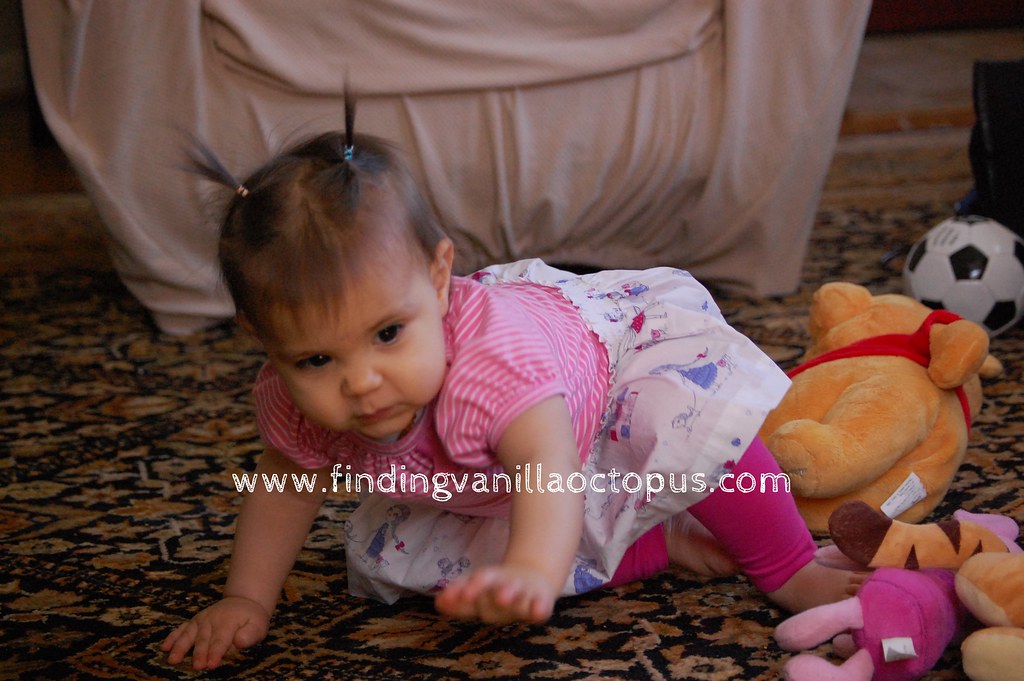 As she cruised along the chair, I got the impulse to put her up there one more time for a comparison shot with Pooh. I'd tried to line him up next to her on the floor, and it simply hadn't been working. Since the whole point of taking pictures with him from the beginning was to see her size grow against his, I really wanted a good shot for her very last official portrait session with me. 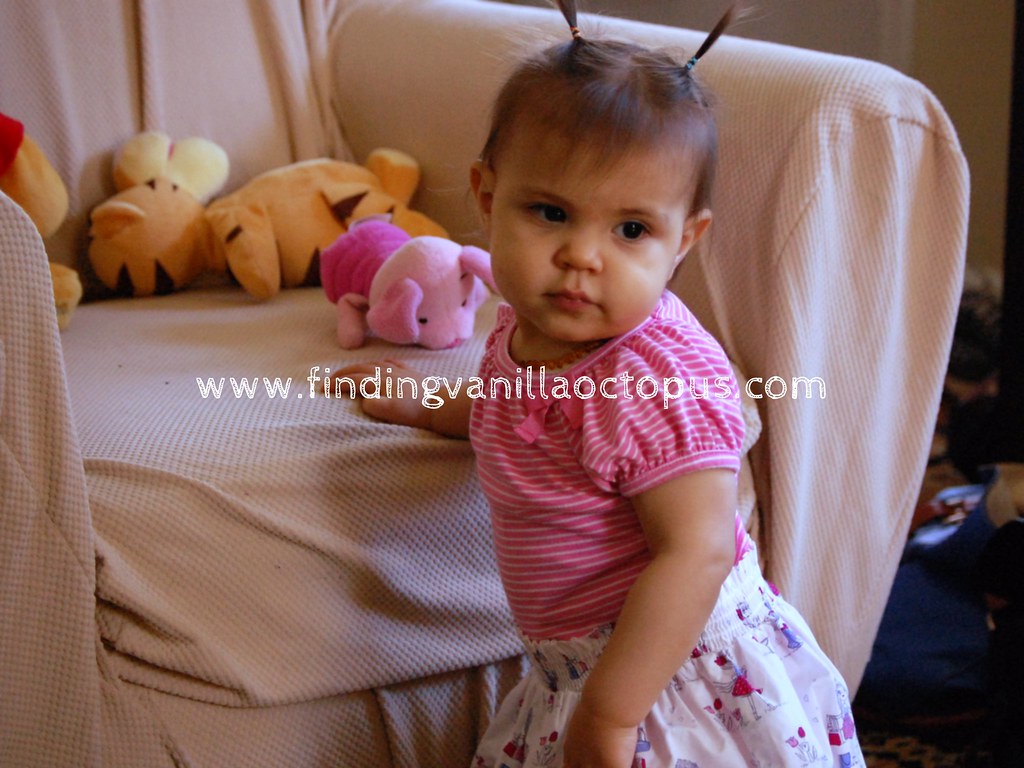 By this time, she was really disinterested in sitting still, and I had to weave and bob just to get two shots in before my worst fears were realized. 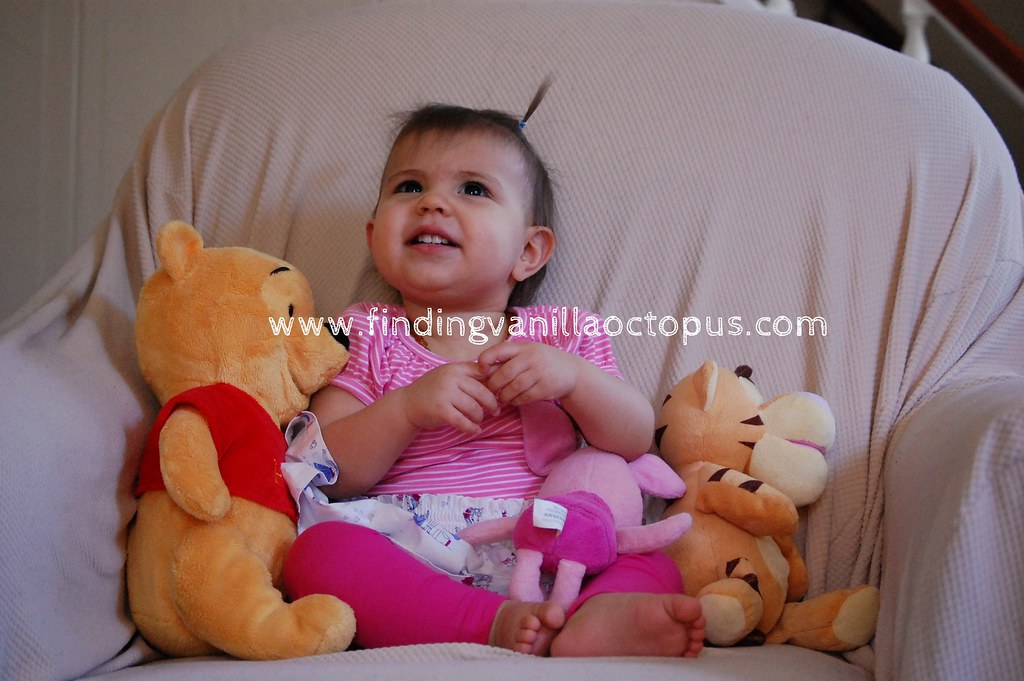 You'd never think it looking at her there, but she had big, clear plans to get herself back on floor level and she lunged with a speed I had not quite anticipated. I jumped for her, just a moment too late to catch her fall. Tears ensued, which came on immediately and were soothed quickly as I picked her up and definitively ended our little project for the afternoon.

What did catch my fall, though, was the camera, something I did not even realize until later when the fingers on the hand that were holding it began to lightly throb as I tried and failed to get a response from the shutter while pushing down the button that controls it. Though I continued to count my blessings that Mia came out unscathed, I began to despair for my beloved camera.

A bit of experimentation later in the afternoon revealed that it was not the camera that had perished, however, but the lens. Less bad news, but sad news all the same. Though it was a mere kit lens, it's the only one I had capable of close-ups, and has long been my favorite for taking portraits. But while I truly regret its demise, I am quite grateful for its sacrifice. A lens is a much less costly thing to replace (someday), after all.

As for Mia, I was all-too-clearly reminded of one major reason why I don't attempt Month pictures anymore after twelve months- the little rascals are just too hard to keep up with after that. In the end, though, she provided me with four options to choose from for that comparison I was so determined to make.

And what a difference. My, how she's grown.