Now it's night number two of this grand adventure, and I'll admit that I've spent so much of the day thinking of the many things that I could write about that I'm reluctant now to continue with this post as originally planned.  I'm also not sure that I can provide a sufficient explanation for the name, after all.

My daughter, Abby, received many lovely gifts at my baby showers and shortly after her birth, including a stuffed octopus that plays different tones if you squeeze each of its eight legs.  This particular gift was given to her by her Nana (paternal grandmother), and I remember being delighted by its adorable large eyes and simplicity.  But, due to my incurable tendency towards utter disorganization, it was tossed in  a corner of what was to be her nursery along with a few other things, to be brought out for her use once she was old enough to be aware of it.

Interestingly, this octopus is imbued with a pleasant smell, and even though it was out-of-sight, out-of-mind for a couple of months, the smell worked its way into the atmosphere of the nursery, and I would wonder at it every time I walked in.  It smelled faintly of vanilla, but I hadn't any idea of where it could be coming from, as the detergent I use to wash her clothes smells nothing like it, and I didn't have any air fresheners in the room.

Fast-forward to when Abby was about four or five months old, and it occurred to me that Abby might be old enough to enjoy playing with it.  I brought it out into the living room for her, and for the first time, I noticed the smell.  And I had an "ah-hah" moment in which I finally realized what had been freshening Abby's room.  I was so excited about it that I reported my discovery to Tom as soon as he came home that night.  We both began to lovingly refer to it as Vanilla Octopus.

As far as favorite toys go, it has risen and fallen, many times, in Abby's esteem.  She still can't get the hang of squeezing hard enough to make it sound the tones it's designed to make, but she does seem to enjoy the look and feel of it.  And it has a nifty little handle on its head that makes it easy to carry around.  But one of her favorite words to say right now is "octopus," though her version is "op-oh-sit," and I think that my joy in the discovery of that sweet-smelling octopus is a fitting metaphor for the many lovely impromptu developments that have occurred in my own life.  They came as a result of unexplored or never-made plans, in the midst of a general lack of direction, and delivered joy in the form of the unexpected.  Like Abby herself.

Say hello to Vanilla Octopus.  (Or should I say Op-oh-sit?) 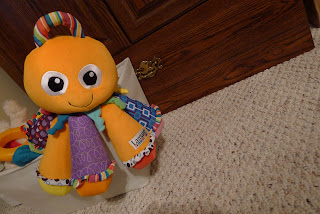 Email ThisBlogThis!Share to TwitterShare to FacebookShare to Pinterest
Labels: starting a blog