On Saturday, I officially clocked in 34 weeks with this pregnancy. It was a moment of victory for my obstetrician, I am sure, who has been fretting about all of the pre-term contractions and early dilation for some time now.

For me, it is a bag of very mixed emotions. Chief among them, certainly, is relief. If everyone's concerns had been better founded, making it to 34 weeks would be a true miracle in that every week longer and closer to term- especially when pre-term labor is looking like a possibility from 28 weeks on- is a huge bonus for Baby in many, many, ways.

However, though things seemed to start off just differently enough this time with Little Squish than with her brother and sister before her, it's all seeming like old news to me now.

This pregnancy has been the toughest from the start. All horrible pregnancy symptoms aside, I knew it would be difficult based on the anxiety alone, which after two losses in a year's time has proved incredibly difficult to control. But on top of that, the nausea was the most pervasive and most resistant to any attempt at relief, the exhaustion was fierce and only slightly abated once I crossed into the third trimester (at which point I am dealing with other issues that slow me down even more), and those pesky pre-term contractions showed up earlier than ever, at around 24 weeks, and started causing changes to my cervix by week 28. Though the nausea ended sooner than every other pregnancy (by 11 weeks or so) it was immediately replaced by near-constant and fairly awful heartburn, which I have just finally conceded to getting under control with medication. I can only take so much, after all.

However, scary as it was to find myself half a centimeter dilated at 28 weeks, it's much less concerning now to be one centimeter at 34. The slight change that has occurred has been very gradual over the last six weeks, and has not appeared in combination with any effacement or evidence of fetal fibronectin (every test taken for that has been negative), which seems to me an indication that the scenario proving most likely to play out at this point is that I will be in this thing for the long haul. If my doctor has her way, that "haul" will be no longer than 39 weeks, at which point I will be summarily induced to ensure that it is a doctor's hands who catch my newest baby, rather than my panicked husband's.

Should she ultimately decide to come a bit sooner than that (because it seems that no matter what my body may be trying to do, she is still in control here)? Only time will tell, I guess.

But now that I am here, at this point in which I can finally breathe and relax (as much as that is really possible) and stop concerning myself with some of the what ifs, I've started to let a lot of doubt and regret sneak in past the overwhelming anxiety.

For as well-documented as Amelia's pregnancy was, in the form of little notes and pictures on a near-weekly basis, and topped off with a published account of her birth story in the anthology, It's Really 10 Months Special Delivery: A Collection of Stories from Girth to Birth

, this pregnancy has been quite the opposite.

I've been quiet this time, not just on the blog but in general, for reasons that are difficult to explain. I've been reluctant to take pictures, let alone post them, and have kept any public commentary on the experience to a minimum. In the beginning, this was all rather reactionary and driven by fear. It was hard to know if I could count on the pregnancy continuing. Even after more extensive testing than I have ever pursued before only promised good things, it was hard to have faith.

But over time I did pass some critical point, where I ceased to wonder if the next day might reveal impending miscarriage. And at that point I was silenced by other emotions, like guilt. Prior to actually experiencing loss, I had only ever imagined how horrible it might be. Prior to going through a procedure- twice- that was emotionally grueling and terrifying in the potential (though unlikely) impact it might have on my future fertility, I never really thought twice about struggling to be pregnant. Prior to waiting six short but long months to finally conceive again after the last loss, I never had thought particularly hard about how I might feel if I never got a chance to experience pregnancy again.

After all of that, after the months I spent having to avert my eyes from pregnancy announcements and pictures, after suffering pain where there should only have been joy, I began to feel a bit insecure about my own seeming good fortune. I still wonder whose heart I am breaking, somewhere out there, as I go about trying to heal my own.

As I near the end of this experience, however, it occurs to me to think about myself and my own child, too. How will I explain to her the dearth of pictures? The seeming lack of motivation to capture the experience in the careful and dedicated way I did her older sister's, and even her brother's before her? It won't be enough to try to explain my sadness or my inner conflict. It won't make up for all that I did not do.

And so now, however wrong or right it may be, I am trying to find the courage to embrace the joy and leave behind the all the various negatives that have been blocking it out. I want to feel pride again in the accomplishment of a successful and healthy pregnancy. And most of all, I want this little one to be able to look back and find plentiful evidence that she, too, was loved, wanted, and anticipated, despite the circumstances surrounding her over-troubled mother at the time. 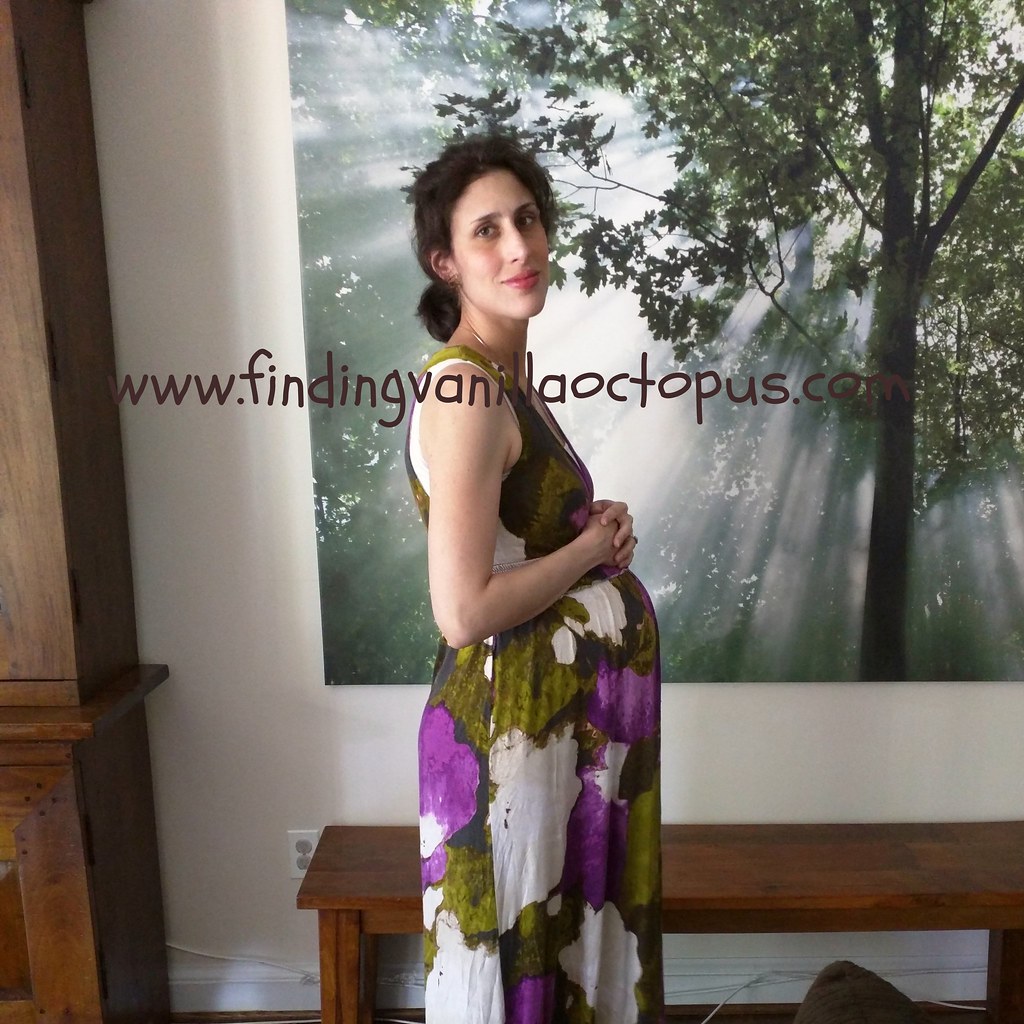 Little Squish, though I may not have nearly 40 little letters to show you some years down the line, please know that you were and are loved, and we can't wait to meet you to tell you so someday very soon.
Posted by Unknown at 12:32 PM