Ever since that first crucial meeting when she was newly two years old, Abby has not been a fan of Santa. Though she finds the plush toys and figurines that represent him pleasant enough to have around, and has historically enjoyed the telling and re-telling of The Night Before Christmas- savoring the experience of story time as she does with any book that we bring to life in the reading- she has always found the prospect of meeting him in person a daunting one.

It's understandable. Santa is a stranger, after all, jolly though he may be. However, while I expected her level of discomfort and anxiety to wane over time- even if she was never on board with actually taking pictures with a mysterious costumed entity- it has instead done the opposite. The lovely time that we were all having at the Christmas party we annually attend- populated as it is by peers and friends from her playgroup, fun food, and age-appropriate crafts- almost came to an abrupt end when Santa (aka the host in costume) walked through the front door.

My brave and spirited oldest child instantly lost her smile and proceeded to quietly shake, tears beginning to brim in her overlarge eyes. Catching her expression from across the room, I had to rush to her side and nestle her into her father's warm, safe, arms so that he could escort her to the next room and away from the hustle and bustle surrounding Santa as he seated himself and began to invite guests to come sit upon his lap.

Once out of sight of the enemy and distracted with the gifts that Michael and I collected from the exchange for her, Abby seemed to perk up, and the situation seemed to be handled, as it had been in years past. That is, until the declarations began about not wanting gifts for Christmas.

Tom and I were confused at first. It seemed that she was being contrary and saying things she didn't really mean and/or understand. But she persisted, and began to clarify that she wanted gifts for her birthday, which we had to keep reminding her had just passed. After awhile, it seemed to me that what she was trying to say was that she would rather have birthday presents than Christmas presents. In essence, she wanted presents that came from us.

My suspicions were confirmed when she became uneasy about writing a letter to Santa (a task which we assigned at the last minute to pry some details out of her concerning exactly what kind of Anna doll she wanted). She seemed distressed at the prospect of the letter going to Santa. When I asked her whether she would rather it come to us, the answer was an unhesitating "yes."

It seemed clear to me that Abby was now uncomfortable not only with meeting Santa, but also with the idea of him coming to her house. Once again, the concept made perfect sense (it is a little creepy to be letting some old man into your home while you are sleeping, if you think too hard about it), but what to do about the situation came to me a little less easily. I was wholly unprepared for such a reaction to a character that- as a child- I had never held any opinion of beyond pure wonderment.

After some consideration, Tom and I decided to give Abby a choice in the matter. Did she want us to ask Santa not to come this year, to have Mommy and Daddy give the Christmas gifts instead?

Though it's not what I had planned or expected, I am happy that it will make her happy to celebrate our Christmas this way. She still loves to ask and talk about Jesus and his birth, and that is the part that is most important to me. Next year may be a new twist and a different story, however, once Michael is old enough to have an opinion of his own. Because it seems like no matter what his big sister might think of the jolly old elf, he and Santa are on pretty good terms. 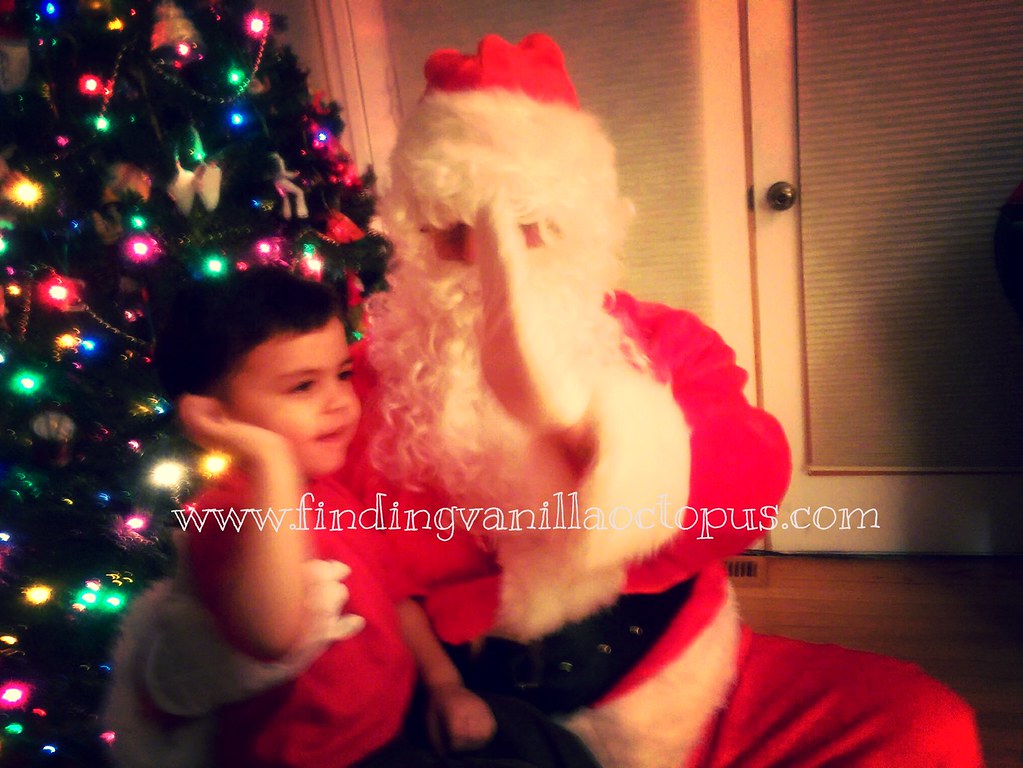