I often joke about needing a vacation from my vacation on the random occasions that we actually take one. To some degree, I'm always hesitant to take one at all given the amount of planning and packing that are required in preparation, and the mess that always ensues upon our return. Suitcases are hastily dragged inside, usually right around bedtime, and take up residence in their haphazard spots for weeks following as I try to drudge up the energy to empty them of their varied contents and put them away.

Or current, vacation, however, is one that I have been counting the days to. Any chance for a break from the suffocation of the last two weeks was worth whatever it might take to acquire it. A couple of days into it, here we are, blessedly (though all-too-temporarily) free from the discomfort and stress that's been plaguing our leaking home-but-not-so-sweet-home for so long.

I've been determined to appreciate every moment this time around, and have been loathe to even get into old routines, like blogging. However, I thought I'd put in the effort tonight to record a truly memorable day: our first family trip to the American Museum of Natural History.

Abby finally got to see those dinosaur bones we've been talking about for ages (which will sadly now be unavailable for viewing in DC for the next couple of years) and Michael had a grand time taking in all of the sights, from life-sized blue whale replicas to colorful masks lining exhibit walls. As for Mia, this outing marked her very first trip into The City.

We started off our adventure at a Pizzeria Uno in walking distance of the museum. Tom and I learned a few valuable lessons there, one of which was that we should not bother to order any pizza for the kids next time. They hardly ate anything at all, but what they did eat consisted largely of the fries that came with our burgers.

Michael, at least, chugged down his whole glass of milk. 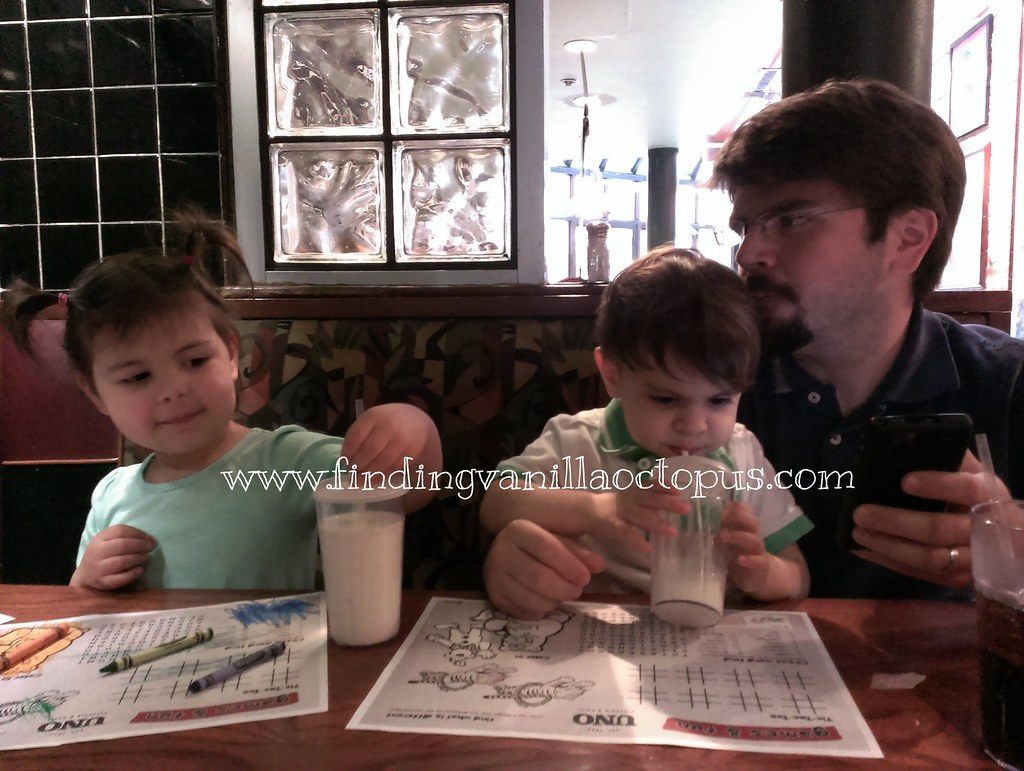 Mia had no interest in being trapped in the very first spot we decided to check into. Certainly, she wasn't about to do it from a booster seat, which I had to take her out of just minutes after snapping the below shot. It was quite the bob-and-weave I had to accomplish, taking bites over a plate pushed just out of her reach as I tried to inhale my burger with minimal dripping on either her or me. In the meantime, she was singularly fixated on the glob of ketchup just at her fingertips, which simply begged to have a tiny finger dipped within. 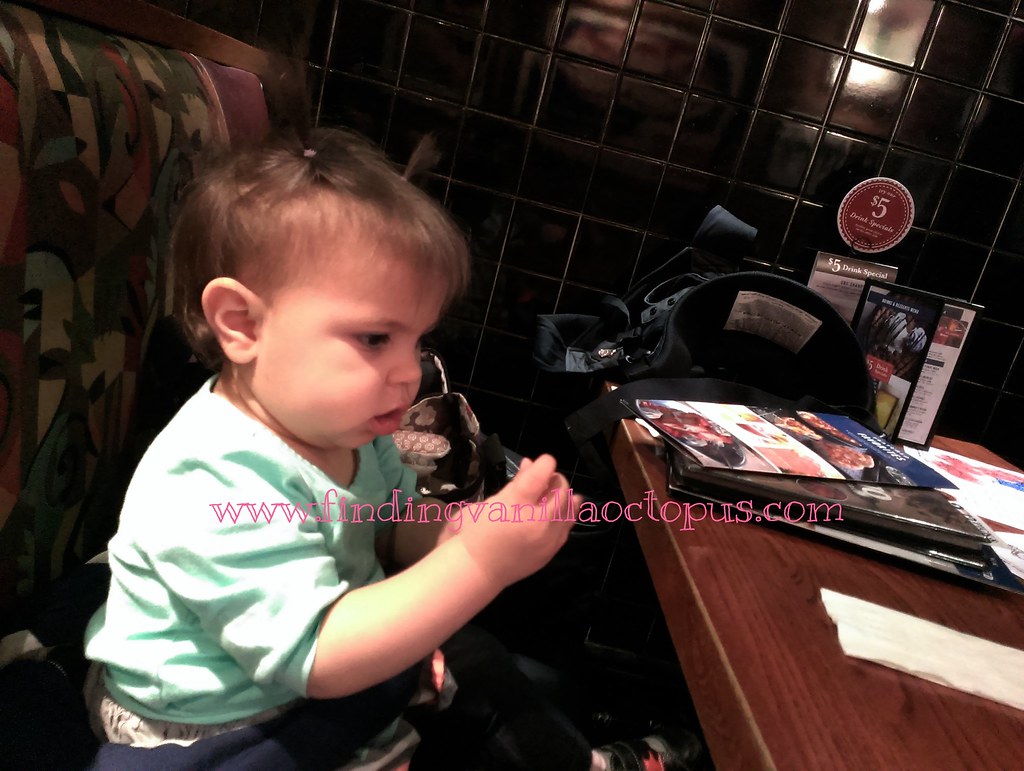 The museum trip, itself, went far more smoothly. Though Mia was a bit restless on my back, she didn't complain overly much, and Abby and Michael were instantly transfixed by their surroundings. Our first stop, at Abby's request, was to the Ocean exhibit to see the whale. She was not disappointed.

Next up were the dinosaurs, which brought about a pleasing amount of awe and wonder, as well. When we reached him, we stopped to take pictures of the older two with the family favorite: Triceratops. 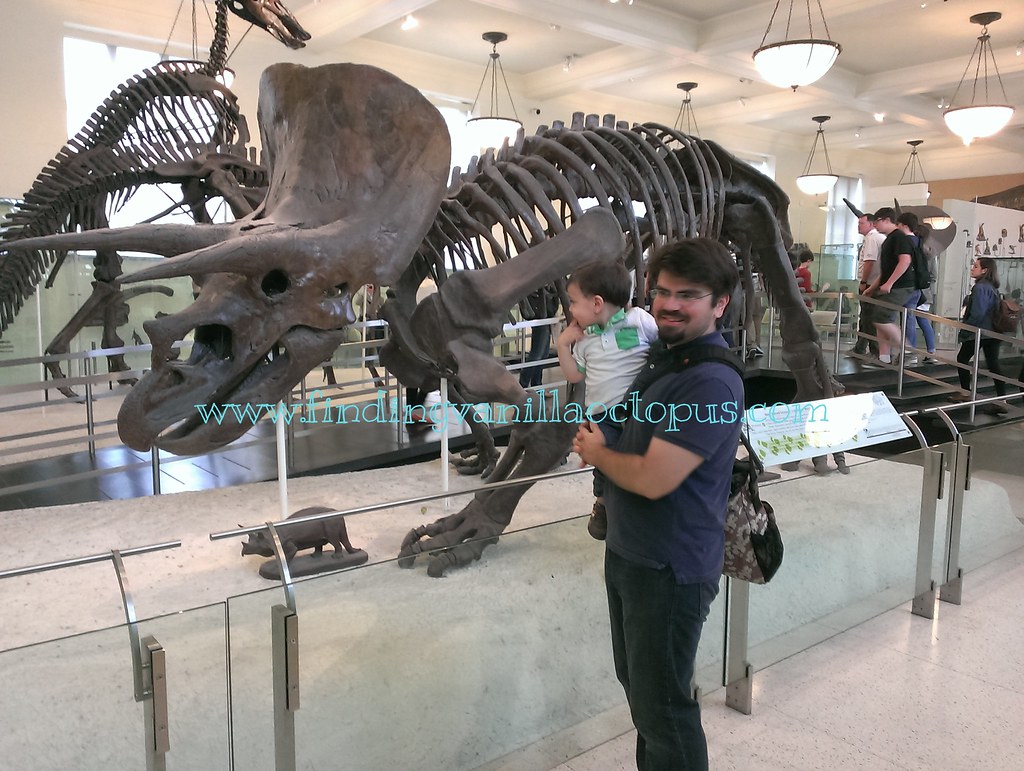 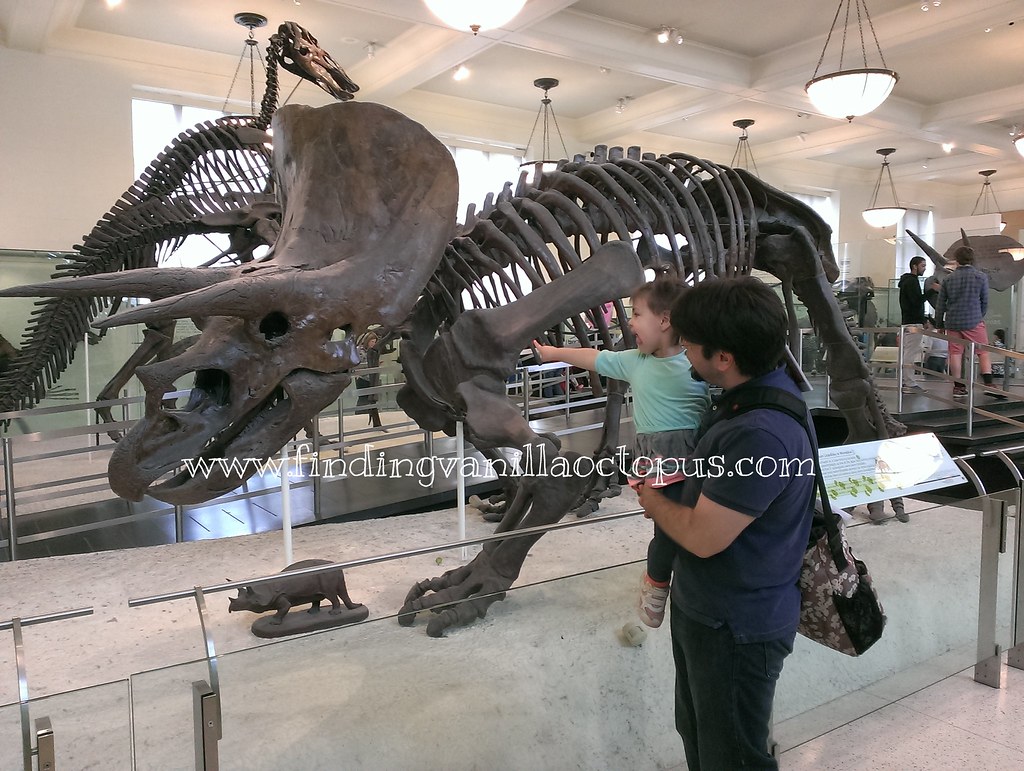 I made sure to get a picture of this guy, (our second-favorite) as well. 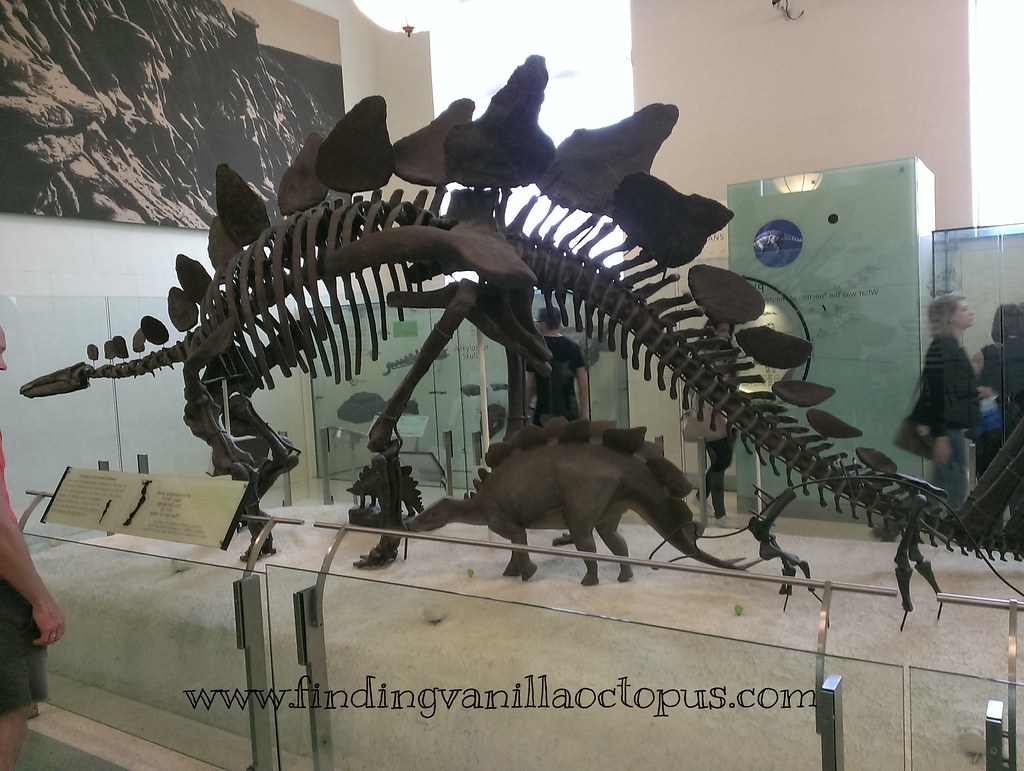 Mia missed out on photo opportunities, as I found myself having to front-carry and nurse her for a time to keep her happy.

Of course, just as she was starting to get with the program again, the other two were reaching the end of their limits. Tom and I decided that we'd start wrapping things up as soon as we got a little leg-stretching out of the way. 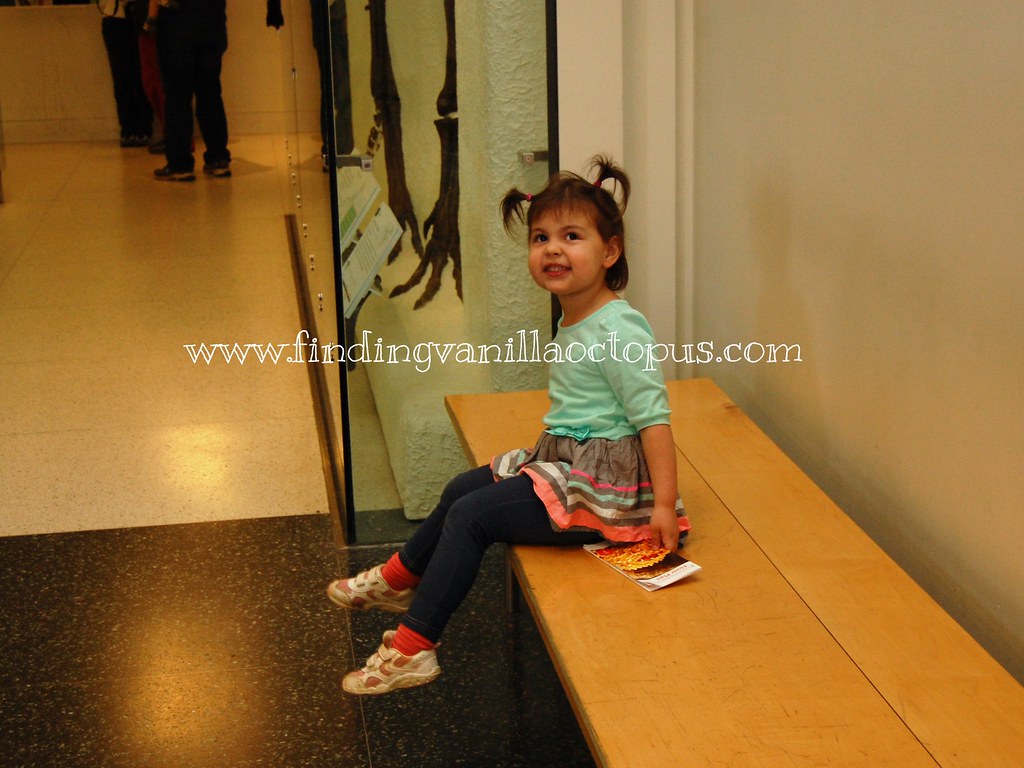 Being the appointed guardian of Abby, Mia, and the bags and strollers, I couldn't let Abby wander far, but she managed to get some exploring done all the same. 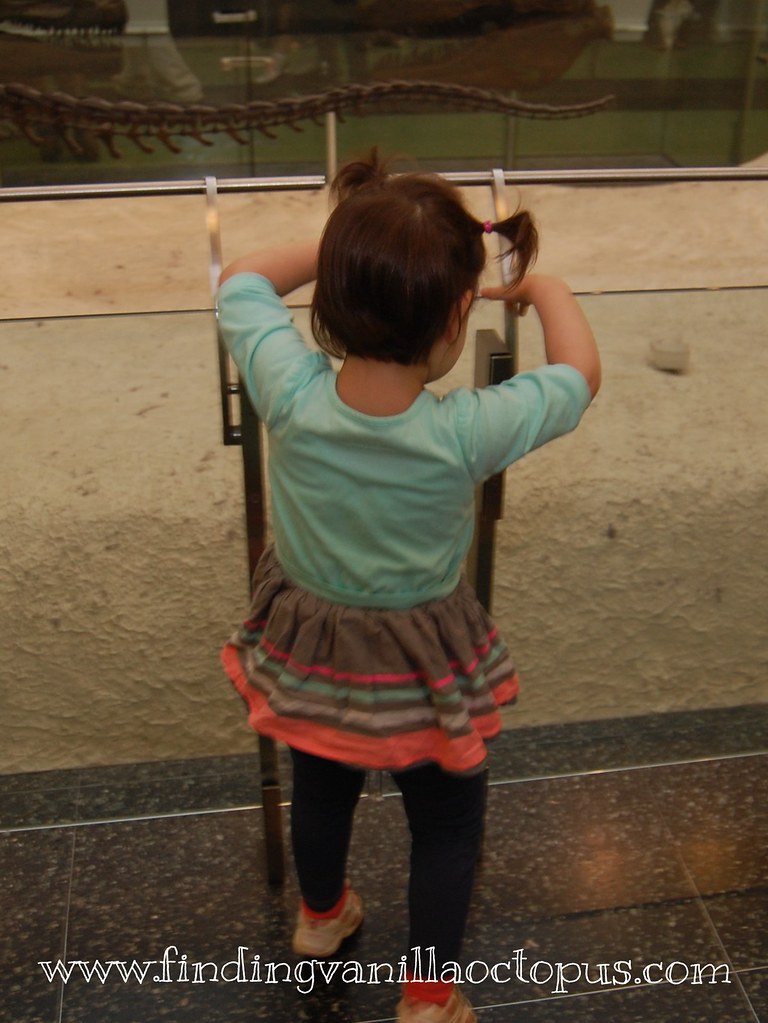 Michael, on the other hand, got a private tour with Daddy of the entire Hall of Saurischian Dinosaurs. 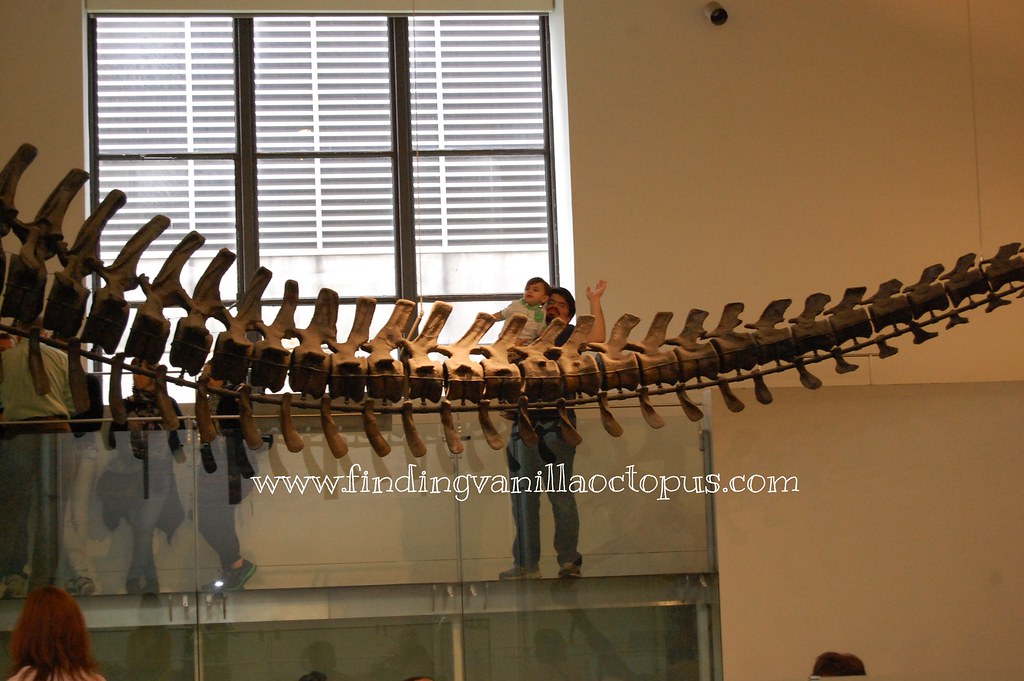 It was a sad moment when Michael realized he'd have to go back in the stroller to head towards home. 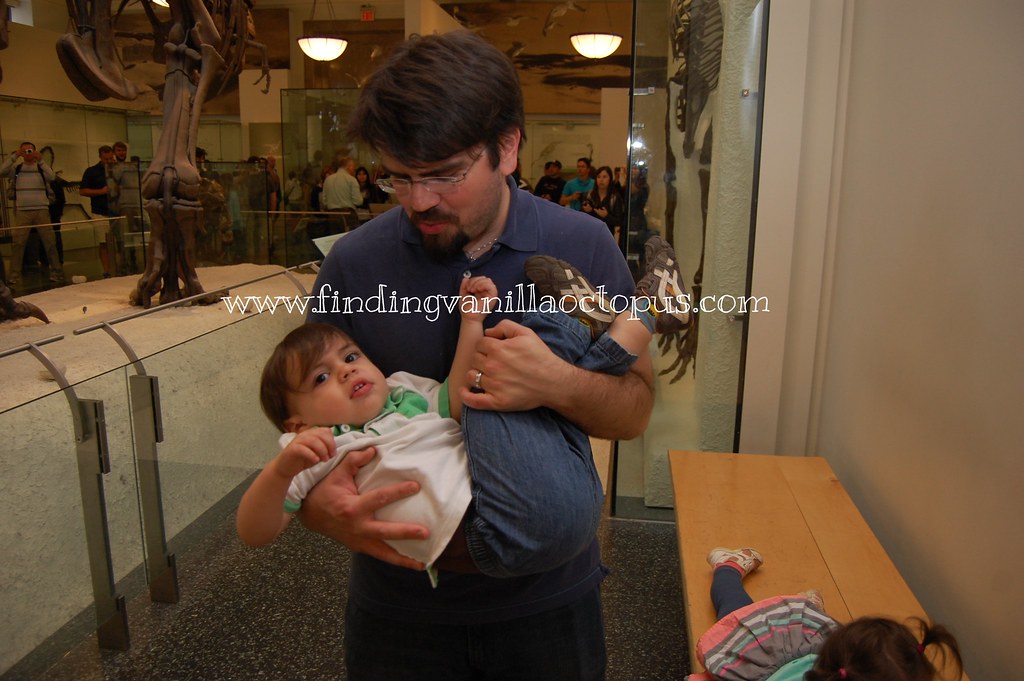 It was an even sadder one when we all realized we'd be spending more time in the car trying to get back to New Jersey than we had in the big city.

Still, worth it. If I ever need reminding, I'll be sure to ask Abby just how big that blue whale was. With her short arms and pint-sized hands she'll stretch as far as she can to show me: "This big!"  Not a moment she'll soon forget. Nor I, for that matter.
Posted by Unknown at 7:24 PM